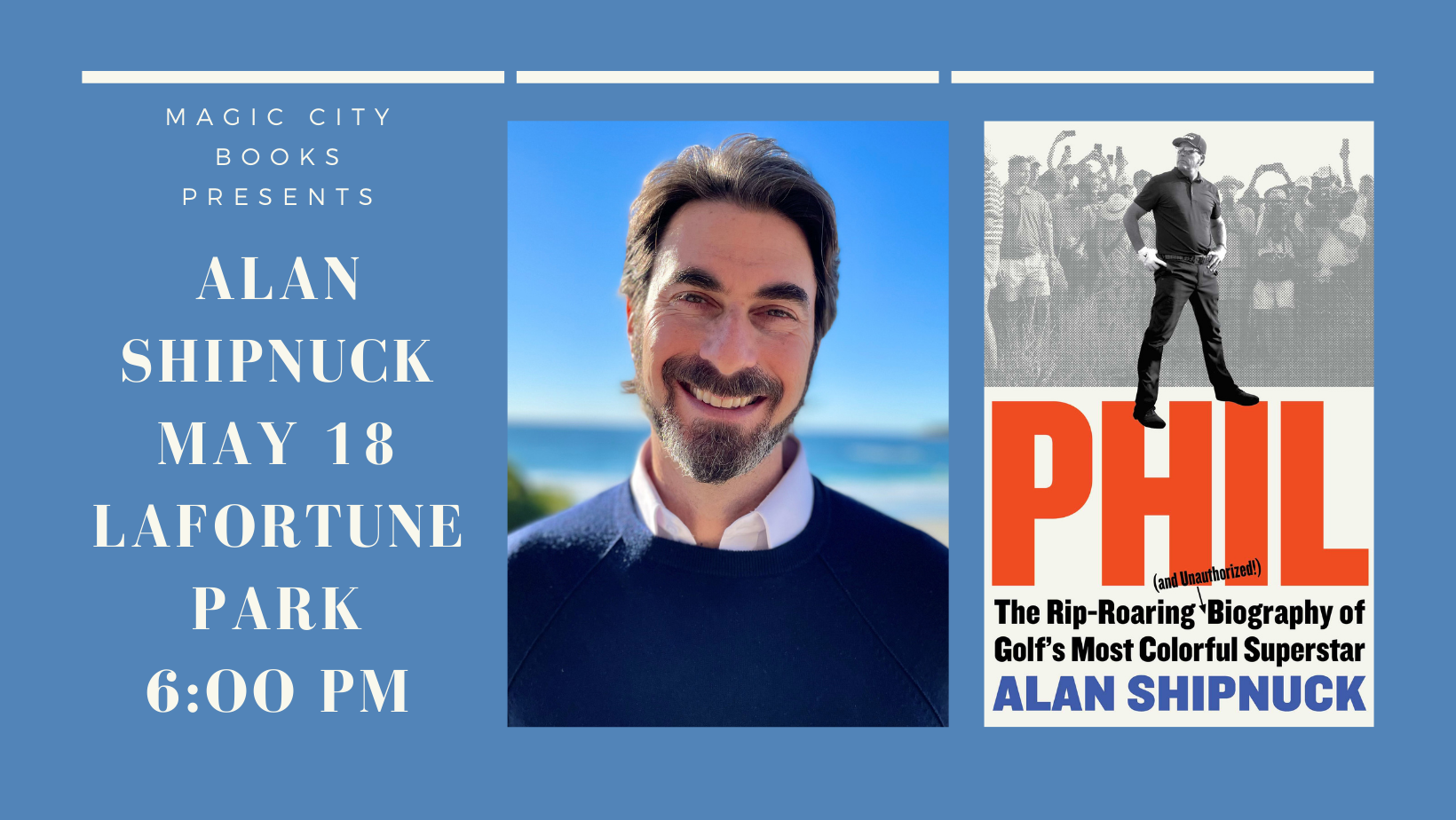 Magic City Books is proud to welcome best selling golf writer Alan Shipnuck for an in-person author program to celebrate his new book, Phil: The Rip-Roaring (and Unauthorized!) Biography of Golf’s Most Colorful Superstar on Wednesday May 18 at LaFortune Park. The event will begin at 6:00 pm and copies of Phil by Alan Shipnuck will be available for sale at the event.

If you would like to order a copy to be signed by Alan Shipnuck and are unable to attend the in-person event on May 18, you can purchase online at https://magiccitybooks.square.site/product/phil/754 or call Magic City Books at 918-602-4452.

Phil Mickelson is one of the most compelling figures in sports. For more than three decades he has been among the best golfers in the world, and his unmatched longevity was exemplified at the 2021 PGA Championship, when Mickelson, on the cusp of turning fifty-one, became the oldest player in history to win a major championship.

In this raw, uncensored, and unauthorized biog­raphy, Alan Shipnuck captures a singular life defined by thrilling victories, crushing defeats, and countless controversies. Mickelson is a multifaceted character, and all his warring impulses are on display in these pages: He is a smart-ass who built an empire on being the consummate professional; a loving husband dogged by salacious rumors; a high-stakes gambler who knows the house always wins but can’t tear himself away.

Mickelson’s career and public image have been defined by the contrast with his lifelong rival, Tiger Woods. Where Woods is robotic and reticent, Mickelson is affable and extroverted, an incorrigible showman whom many fans love and some abhor because of the overwhelming size of his personality. In their early years together on Tour, Mickelson lacked Tiger’s laser focus and discipline, leading Tida Woods to call her son’s rival “the fat boy,” among other put-downs. Yet as Tiger’s career has been curtailed by scandal, addiction, and a broken body, Phil sails on, still relevant on the golf course and in the marketplace.

Phil is the perfect marriage of subject and author. Shipnuck has long been known as the most fearless writer on the golf beat, and he delivers numerous revelations, from the true scale of Mickelson’s massive gambling losses; to the inside story of the acrimonious breakup between Phil and his longtime caddie, Jim “Bones” Mackay; to the secretive backstory of the Saudi golf league that Mickelson championed to wield as leverage against the PGA Tour. But Phil also celebrates Mickelson’s random acts of kindness and generosity of spirit, to which friends and strangers alike can attest. Shipnuck has covered Mickelson for his entire career and has been on the ground at Mickelson’s most mem­orable triumphs and crack-ups, allowing him to take readers inside the ropes with a thrilling immediacy and intimacy. The result is the juiciest and liveliest golf book in years—full of heart, humor, and unexpected turns.

Alan Shipnuck wrote his first cover story for Sports Illustrated in 1994 as a twenty-one-year-old intern, and in the ensuing quarter-century he typed two dozen more. He is the author of eight books, including the national bestsellers Bud, Sweat & Tees and The Swinger (with Michael Bamberger). Shipnuck has received twelve first-place awards in the annual writing contest conducted by the Golf Writers Association of America, breaking the record of Dan Jenkins, a member of the World Golf Hall of Fame. He is a partner at the golf media company the Fire Pit Collective, where all of his writing, podcasts, and video storytelling can now be found. Shipnuck lives in Carmel, California.