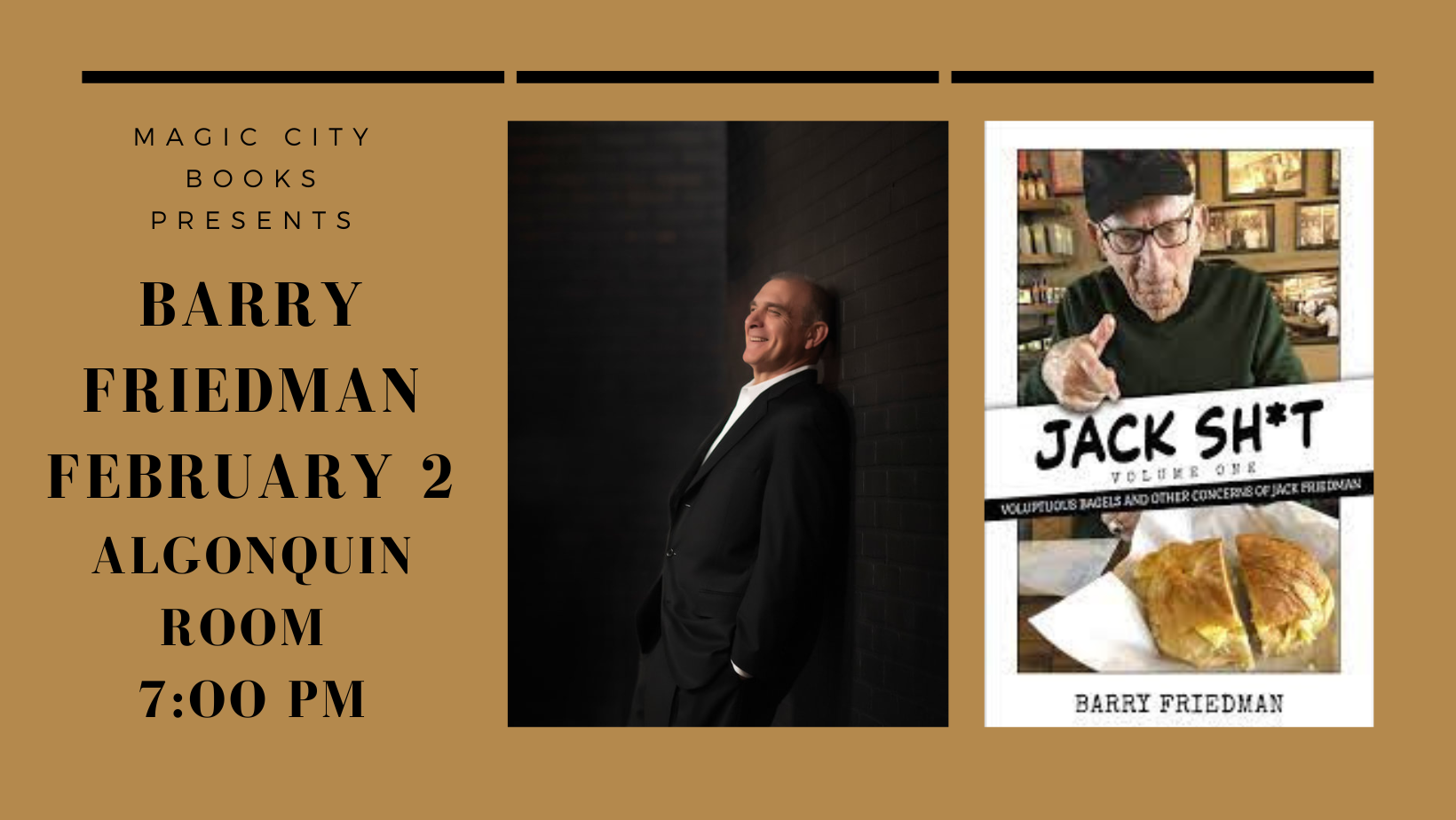 Magic City Books is thrilled to welcome back our friend Barry Friedman for an in person event celebrating his new book, Jack S*it: Voluptuous Bagels and Other Concerns of Jack Friedman, on Wednesday February 2 at 7:00pm in the Algonquin Room at Magic City Books.

Barry’s father, Jack Friedman became known to many through Barry’s Facebook posts through the years, join us for more stories about the incomparable Jack Friedman.

This event is free and open to the public. You can purchase Jack S*it at Magic City Books or online at: https://magiccitybooks.square.site/product/jack-s-it/991.

My father, Jack Friedman, CPA (even if he made the diploma himself), and Purple Heart recipient (even if lifted it from the guy in the bed next to him in a Tokyo Army hospital), moved to Las Vegas from Atlantic City when he was 78.

He bought a house at 84. The bank gave him a thirty-year mortgage.

This is that story. The early years-and by early, I mean his 80s. I spent more time with him at this point in his life than any other.

I am a comedian. I had time.

This is the first volume of my conversations, arguments, buffets, and philosophical musings with my father from the years 2004-2014. There was “The Mob,” the survivor’s group of those who buried their spouses, the bowling, the possible death of Bernie, the coupons, the long-suffering Jeannette “who buried two husbands. Did you ever? Two!” And always the toupees, many kept in boxes in the bedroom, garage, and sometimes out on the dinner table.

My father, though in his 80s, thought he looked 40, and had the energy of a twenty-year-old.

As he entered his eighth and ninth decades, he couldn’t hear, didn’t listen, had no short-term memory, and mostly didn’t care.

It was the perfect scenario for a son trying to understand his father.

As my sister, whose name he couldn’t always remember, once said about his approach to life, “He’s been like that for as long as I’ve known him.”

I should have started this book sooner.

An essayist, reporter, and political columnist, Barry Friedman‘s work has appeared in Esquire, where he has co-hosted “The Politics Blog with Charles P. Pierce” (Pierce in fact gave him the name “Friedman of the Plains”); The Progressive Populist; Inside Media; The Las Vegas Review-Journal; and AAPG EXPLORER, a magazine for petroleum geologists, which is all the more noteworthy, considering he knows little about petroleum geology and has hurt himself pumping his own gas. Further, Barry has appeared in national commercials, a few local ones, including a local pizza joint, which featured him lying on his back, facing and barking at a pizza. He does radio commentary on Public Radio and appeared in UHF with “Weird Al” Yankovic, setting the bar for all those who might someday play a character named “Thug #2.” The movie still provides him with $3.76 residual checks every time it plays at some Lithuanian drive-in. You can find out more about Barry at barrysfriedman.substack.com or www.friedmanoftheplains.com.