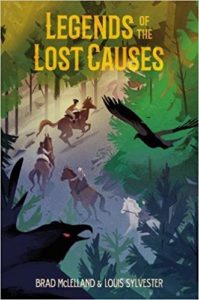 A band of orphan avengers. A cursed stone. A horde of zombie outlaws.

This is Keech Blackwood’s new life after Bad Whiskey Nelson descends upon the Home for Lost Causes and burns it to the ground. With his home destroyed and his family lost, Keech will have to use the lessons he learned from Pa Abner to hunt down the powerful Char Stone. Luckily, he has the help of a ragtag team of orphans. Together, they’ll travel through treacherous forests, fight off the risen dead, and discover that they share mysterious bonds as they search for the legendary stone. Now it’s a race against the clock, because if Bad Whiskey finds the stone first…all is lost.
But Keech and the other orphans won’t hesitate. Because they’re more than just heroes. They’re Lost Causes.

“Legends of the Lost Causes” marks the thrilling start to an action-packed middle grade series by debut authors Brad McLelland and Louis Sylvester.

The event is free and open to the public. A book signing will follow the event.