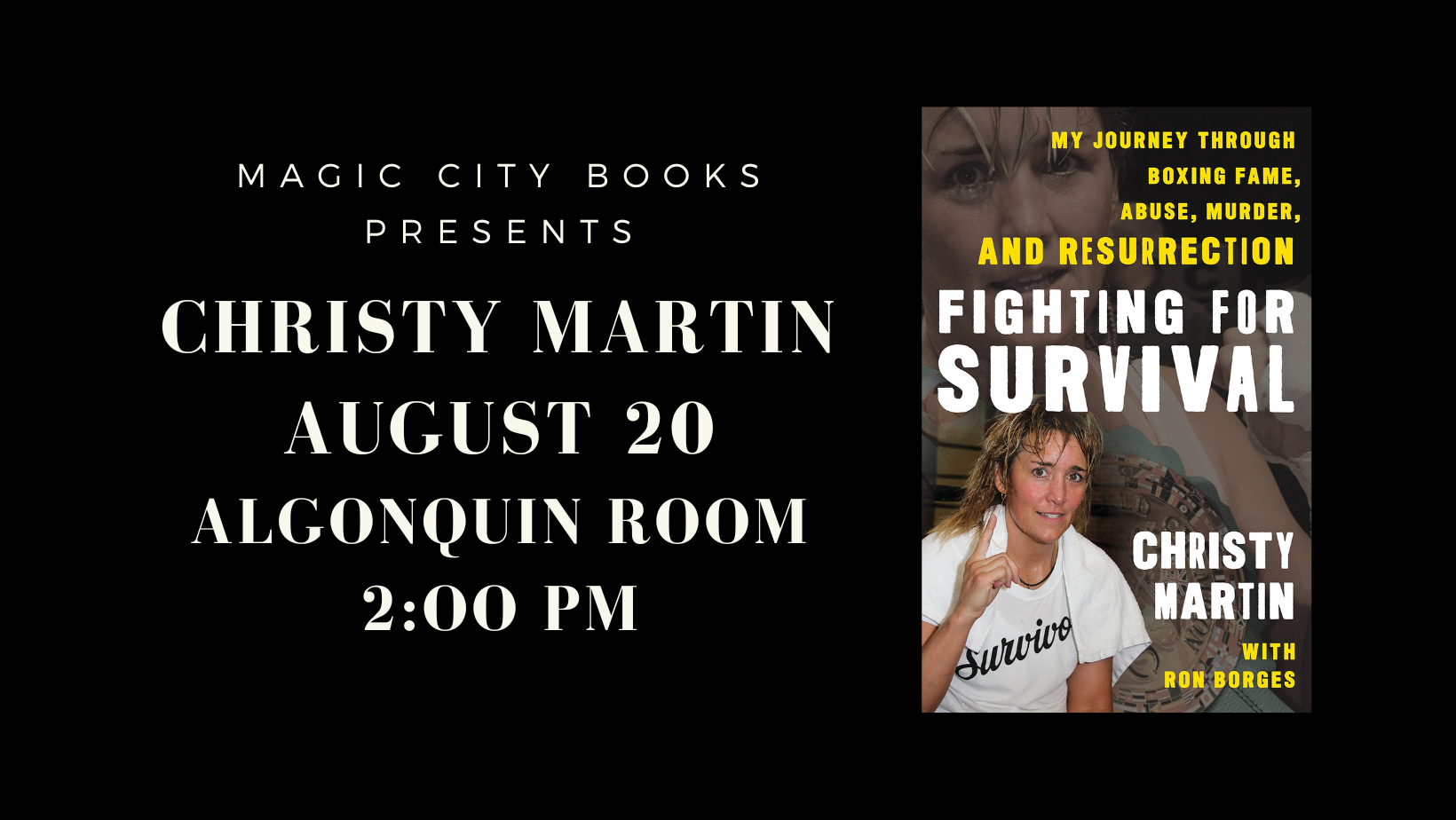 Magic City Books is proud to welcome Christy Martin, one of the most successful boxers of all time and a member of the International Boxing Hall of Fame, for a book signing event on Saturday August 20 at 2:00 pm. This free event will take place in the Algonquin Room at Magic City Books.

Boxing legend Christy Martin was a trailblazer in the ring and continues to be an inspiration to female fighters across the globe. She is without a doubt the most important woman in the history of female combat sports. But behind the scenes Martin was in a losing battle, unable to express her true sexual identity and struggling to survive sexual and domestic abuse at the hands of her husband.

Fighting for Survival will be available for sale at the event on August 20 or if you can’t attend, you can purchase a copy online to be signed by Christy Martin and will be shipped out on Monday August 22, https://magiccitybooks.square.site/product/fighting-for-survival/830.

In Fighting for Survival: My Journey through Boxing Fame, Abuse, Murder, and Resurrection, Christy Martin recounts her harrowing yet inspiring story. Growing up in a small town in West Virginia, Martin felt forced to keep her sexual orientation hidden to please her family and the sports world, eventually agreeing to a sham marriage with coach Jim Martin. While she rose to prominence in the world of boxing, Martin was secretly contending with substance abuse, domestic violence, and an attempted murder by her husband, who left her to die on their bedroom floor.

Fighting for Survival reveals how Martin battled back to life from her near-death experience, how she overcame abuse, violence, addiction, and 40 years of living in the closet, and how she turned her pain into victory and debasement into triumph. Her story is one of hope and self-belief, an inspiration for anyone struggling to break the chain of abuse or who fears to be open about their sexual orientation. It is more than the story of a boxing champion; it is the story of a survivor.

Christy Martin is the most successful female fighter in boxing history and widely regarded as the woman who legitimized women’s participation in boxing and other combat sports. Discovered by legendary promoter Don King, Martin went undefeated for nearly a decade, won the WBC world junior welterweight championship, and became the first female fighter to box on national television, premium cable (SHOWTIME), and pay-per-view. In 2020 she became the first woman enshrined by the International Boxing Hall of Fame. The induction ceremony will be held in 2022. Martin is currently CEO of Christy Martin Promotions, a boxing promotional company. She runs a charitable foundation, Christy’s Champs, that helps domestic violence survivors and their children, and is a frequent speaker around the country on domestic violence issues. Today she is happily married to a former opponent, Lisa Holewyne. Originally from Mullens, WV, Martin now splits her time between central Florida and Austin, TX.