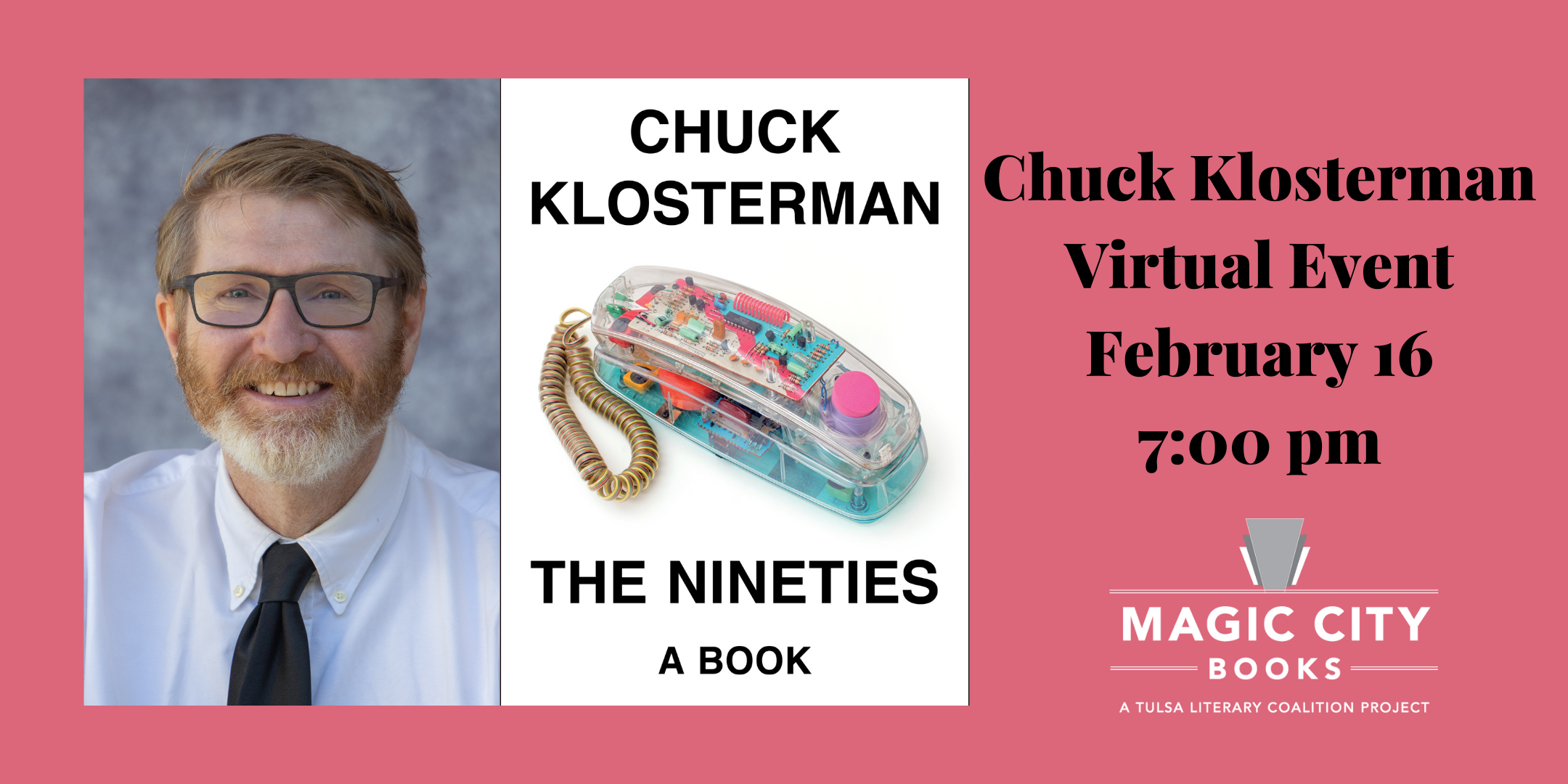 Magic City Books presents an exclusive virutal event with Chuck Klosterman, to celebrate his new book, The Nineties. Klosterman has brought his signature style into a wise and funny reckoning with the decade that gave us slacker irony about the sin of trying too hard.

The Nineties is being published on February 8, shipping via USPS will begin that day and all tracking information will be sent from stamps.com. Please be understanding of potential shipping delays.

The link to the virtual event will be sent to the email address used to purchase your ticket on Tuesday, February 15. Be sure to double check your information at check out, please use an email that you regularly check and make sure that you enter your complete shipping address if having your book shipped.

It was long ago, but not as long as it seems: The Berlin Wall fell and the Twin Towers collapsed. In between, one presidential election was allegedly decided by Ross Perot while another was plausibly decided by Ralph Nader. In the beginning, almost every name and address was listed in a phone book, and everyone answered their landlines because you didn’t know who it was. By the end, exposing someone’s address was an act of emotional violence, and nobody picked up their new cell phone if they didn’t know who it was. The 90s brought about a revolution in the human condition we’re still groping to understand. Happily, Chuck Klosterman is more than up to the job.

Beyond epiphenomena like Cop Killer and Titanic and Zima, there were wholesale shifts in how society was perceived: the rise of the internet, pre-9/11 politics, and the paradoxical belief that nothing was more humiliating than trying too hard. Pop culture accelerated without the aid of a machine that remembered everything, generating an odd comfort in never being certain about anything. On a 90’s Thursday night, more people watched any random episode of Seinfeld than the finale of Game of Thrones. But nobody thought that was important; if you missed it, you simply missed it. It was the last era that held to the idea of a true, hegemonic mainstream before it all began to fracture, whether you found a home in it or defined yourself against it.

In The Nineties, Chuck Klosterman makes a home in all of it: the film, the music, the sports, the TV, the politics, the changes regarding race and class and sexuality, the yin/yang of Oprah and Alan Greenspan. In perhaps no other book ever written would a sentence like, “The video for ‘Smells Like Teen Spirit’ was not more consequential than the reunification of Germany” make complete sense. Chuck Klosterman has written a multi-dimensional masterpiece, a work of synthesis so smart and delightful that future historians might well refer to this entire period as Klostermanian.

Chuck Klosterman is the bestselling author of eight nonfiction books (including Sex, Drugs, and Cocoa Puffs; I Wear the Black Hat; But What If We’re Wrong?; and Killing Yourself to Live), two novels ( Downtown Owl and The Visible Man), and the short story collection Raised in Captivity. He has written for The New York Times, The Washington Post, GQ, Esquire, Spin, The Guardian, The Believer, Billboard, The A.V. Club, and ESPN. Klosterman served as the Ethicist for The New York Times Magazine for three years, appeared as himself in the LCD Soundsystem documentary Shut Up and Play the Hits, and was an original founder of the website Grantland with Bill Simmons.