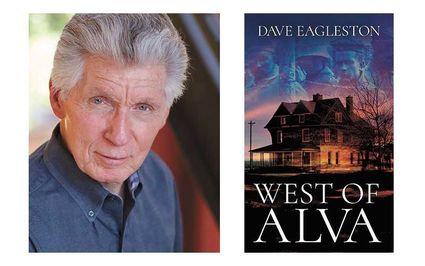 Magic City Books welcomes Dave Eagleston, a native Tulsan and graduate of Will Rogers High School and Oklahoma State University in celebration of his first book, West of Alva.

Dave worked as a cameraman and vocalist at KTUL-TV in Tulsa before joining the Army. After a tour as a combat helicopter pilot in Vietnam, Eagleston traveled the world as a commercial helicopter pilot and aviation advisor. He has lived in exciting locations such as Burma, Russia, Kazakhiston, Thailand, The Philippines, Turkey and three provinces in Canada as well as several beautiful cities in the United States.

Now living in McKinney, Texas, with his wife Janie, Eagleston sings and plays the guitar in the Dallas area.

About West of Alva:

Fifteen-year-old Matt has never driven a tractor, rode a horse, or even stepped foot on a farm. So, when he gets off a Greyhound bus from Tulsa, and is introduced to his new boss-a poor, alcoholic wheat farmer, it’s easy to understand why he is homesick. And why he’s suspicious when he is led to the attic the first night, where he is to sleep across the room from the old farmer. Matt slowly faces the enormous challenges of his summer job while he puts together bits and pieces of truth about the farmer’s downfall. Eventually, though, Matt needs some serious help, so he turns to his new friends: Carol, a beautiful farm girl, and Sam, a young, defiant, black boy.Before the wheat is harvested and the money is in the bank, Matt must convince the troubled farmer to stay sober while he and his friends, try to find the hidden connection between Camp Alva and a dangerous plot to terrorize the farmer and take over his farm. WEST OF ALVA is a city boy’s excursion into the farmland of Oklahoma in 1961, where, twenty years before, Alva, Oklahoma became the largest Nazi Prisoner of War Camp in the United States. It was known as Camp Alva.