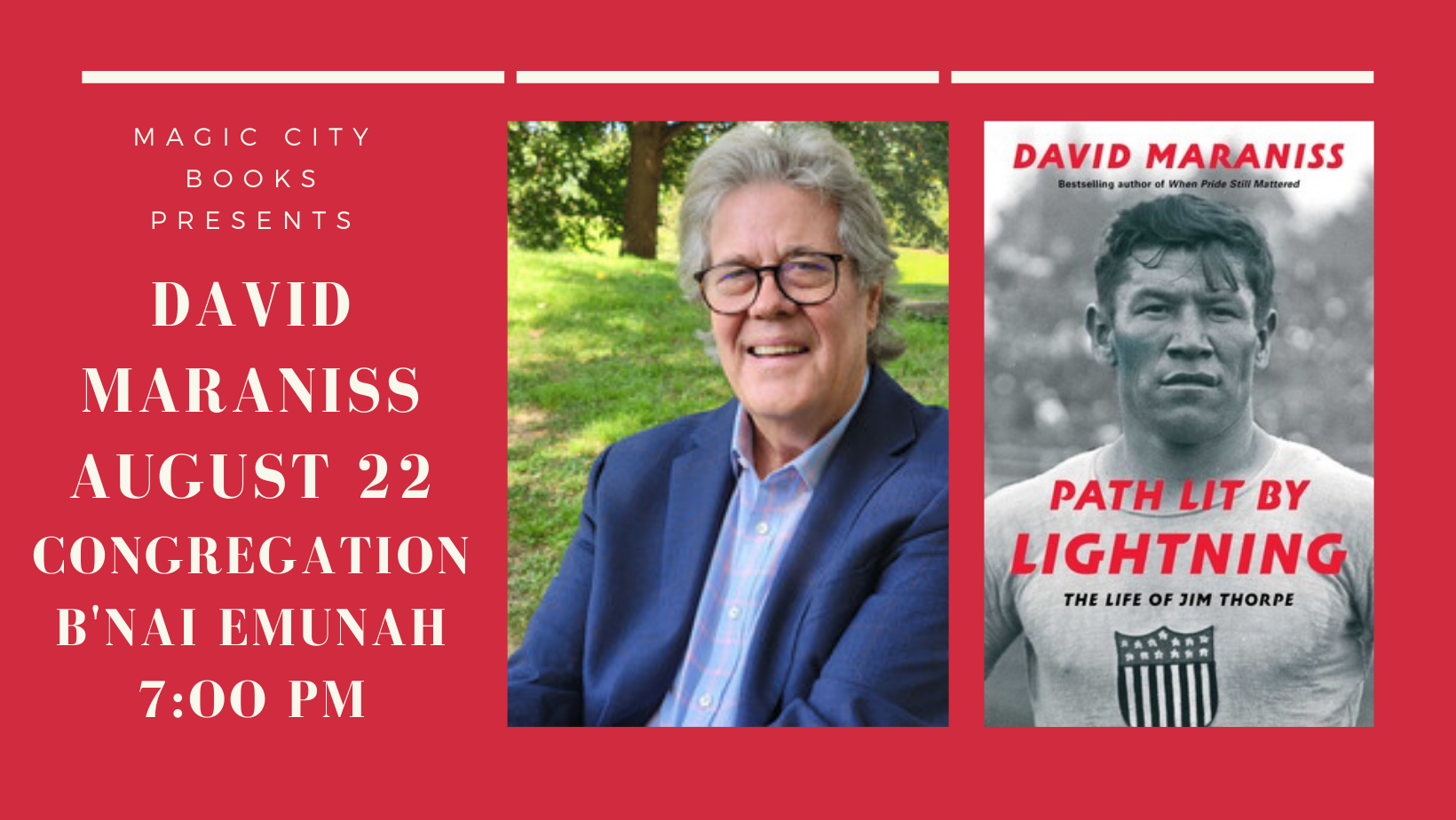 Magic City Books is thrilled to welcome Pulitzer Prize winner David Maraniss for a special in-person program to celebrate his new biography of Jim Thorpe, Path Lit By Lightning on Monday August 22. This free event will begin at 7:00 pm and will be hosted at Congregation B’nai Emunah, 1719 S. Owasso Ave.

A better marriage of subject and author could hardly be imagined. David Maraniss is a prizewinning, bestselling biographer. Jim Thorpe was a great athlete whose story is a paradigm of an era in American history. And although Thorpe never achieved financial success commensurate with his fame, he remained resilient until the day he died. Maraniss knows sports and he knows American history, but most of all, he knows how to tell a great story.

Path Lit by Lightning: The Life of Jim Thorpe is available now. You can order a copy of the book at Magic City Books in person or by phone, 918-602-4452 or online at: https://magiccitybooks.square.site/product/path-lit-by-lightning-the-life-of-jim-thorpe/820. Copies of the book will be for sale at the event and Mr. Maraniss will be signing books.

Joining David Maraniss in conversation will be Traci Sorell, a Cherokee Nation citizen and award–winning author of fiction and nonfiction for young people. Her first five books all received awards from the American Indian Library Association. Those titles are We Are Still Here! Native American Truths Everyone Should Know; Classified: The Secret Career of Mary Golda Ross, Cherokee Aerospace Engineer; At the Mountain’s Base; Indian No More; and We Are Grateful: Otsaliheliga. Her nonfiction titles have also received two Sibert Honors, two Orbis Pictus Honors, and a Boston Globe–Horn Book Honor. In 2022, Traci shares two new titles, the fiction picture book Powwow Day and her first chapter book biography, focused on the late Cherokee Nation Principal Chief, Wilma Mankiller, in Philomel’s She Persisted series. A former federal Indigenous law attorney and advocate, Traci lives with her family on her tribe’s reservation in northeastern Oklahoma. You can learn more about Traci and her work at www.tracisorell.com.

About Path Lit By Lightning

A riveting new biography of America’s greatest all-around athlete by the bestselling author of the classic biography When Pride Still Mattered.

Jim Thorpe rose to world fame as a mythic talent who excelled at every sport. He won gold medals in the decathlon and pentathlon at the 1912 Stockholm Olympics, was an All-American football player at the Carlisle Indian School, the star of the first class of the Pro Football Hall of Fame, and played major league baseball for John McGraw’s New York Giants. Even in a golden age of sports celebrities, he was one of a kind.

But despite his colossal skills, Thorpe’s life was a struggle against the odds. As a member of the Sac and Fox Nation, he encountered duplicitous authorities who turned away from him when their reputations were at risk. At Carlisle, he dealt with the racist assimilationist philosophy “Kill the Indian, Save the Man.” His gold medals were unfairly rescinded because he had played minor league baseball. His later life was troubled by alcohol, broken marriages, and financial distress. He roamed from state to state and took bit parts in Hollywood, but even the film of his own life failed to improve his fortunes. But for all his travails, Thorpe did not succumb. The man survived, complications and all, and so did the myth.

Path Lit by Lightning is a great American story from a master biographer.

David Maraniss is an associate editor at The Washington Post and a distinguished visiting professor at Vanderbilt University. He has won two Pulitzer Prizes for journalism and was a finalist three other times. Among his bestselling books are biographies of Bill Clinton, Barack Obama, Roberto Clemente, and Vince Lombardi, and a trilogy about the 1960s– Rome 1960; Once in a Great City (winner of the RFK Book Prize); and They Marched into Sunlight (winner of the J. Anthony Lucas Prize and Pulitzer Finalist in History).

Praise for Path Lit by Lightning

“In different hands I might be dubious, but David Maraniss revives the titanic Jim Thorpe for a new generation with a surgeon’s care, the diligence of a great researcher, and the poignance and humanity that is the signature of his writing. Path Lit By Lightning is a masterful look at this country’s first super-athlete, unflinching from what conquest did to his people, from the rousing and bittersweet journey of fame and identity, nor from an American century often far less heroic than the book’s protagonist. It’s simply brilliant.”–Howard Bryant, author of The Last Hero: A Life of Henry Aaron

” Path Lit by Lightning is a captivating book by a master storyteller. David Maraniss provides new insights into Jim Thorpe, a man who was not only ‘the world’s greatest athlete, ‘ but a cultural icon complicated by the dynamics of race and celebrity.”–Patty Loew, (Bad River Ojibwe), professor, Medill School of Journalism, Northwestern University, and Inaugural Director, Center for Native American and Indigenous Research

“David Maraniss brilliantly rescues Jim Thorpe from myth and prejudice, restoring something more consequential than the Olympic medals stolen from him by small men–his humanity. This is another masterpiece from the master of biography.”–Jane Leavy, author of The Big Fella and Koufax

“Path Lit By Lightning is a flat-out masterpiece. The story of Jim Thorpe, one of America’s greatest and most misunderstood heroes, is told in riveting detail by David Maraniss, one of our greatest biographers. The result is a portrait as powerful, dazzling, and nuanced as Thorpe himself.”–Jonathan Eig, author Luckiest Man, Opening Day and Ali: A Life