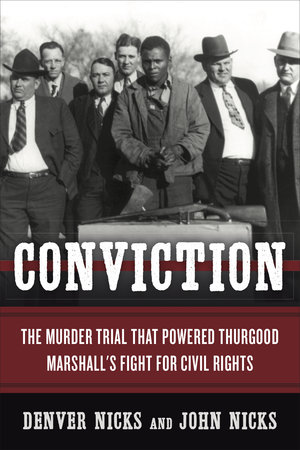 Join us as we welcome Denver and John Nicks for the release of their new book, “Conviction: The Murder Trial That Powered Thurgood Marshall’s Fight for Civil Rights.”

On New Year’s Eve, 1939, a horrific triple murder occurred in rural Oklahoma. As political pressure mounted to find a villain, the governor’s representative settled on W.D. Lyons, a young black farmer who was subsequently arrested, tortured into signing a confession, and tried for the murder. The NAACP’s new Legal Defense and Education Fund sent its young chief counsel, Thurgood Marshall, to take part in the trial.

Conviction is the story of Lyons v. Oklahoma, the oft-forgotten case that set Marshall and the NAACP on the path that led ultimately to victory in Brown v. Board of Education and the accompanying social revolution in the United States.

“This book deserves a standing ovation. It reveals the compelling story of crusading civil rights attorney Thurgood Marshall—who became the nation’s first black Supreme Court justice—and his defense of a black illiterate sharecropper accused of slaughtering three members of a white family in rural Oklahoma. Authors Denver Nicks and his attorney father, John Nicks, shine a light on unforgivable transgressions as they explain how political pressure, intimidation, coercion, and torture can result in a forced confession and the imprisonment of an innocent man.” —Michael Wallis, bestselling author of Route 66 and The Best Land Under Heaven

Denver Nicks is an award-winning journalist, producer and an incorrigible traveler. A former staff writer for TIME, he is a contributor to National Geographic Travel, Rolling Stone, Uproxx, and other publications. John Nicks is an attorney in Tulsa, Oklahoma, specializing in oil and gas, personal injury, and civil rights law.

This event is free and open to the public. Denver and John will be signing copies of the book at the conclusion of the event.