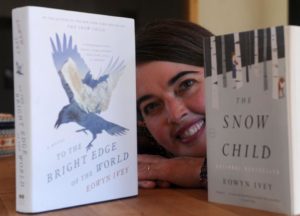 Enjoy an evening with acclaimed novelist and Pulitzer Prize Finalist, Eowyn Ivey. Her novel “The Snow Child” was an instant classic. We discuss her life, work, and highly acclaimed new novel, To the Bright Edge of the World.

/* Starred Review */An 1885 wilderness expedition, a female pioneer of photography, and Native American myths come to life make Ivey’s second novel an entrancing, occasionally chilling, depiction of turn-of -the -century Alaska. Through diaries, letters, reports, newspaper clippings, drawings, and photographs, Ivey evokes an Indian Wars veteran’s expedition up the Wolverine River into Alaska’s northern interior. Colonel Allen Forrester’s mission is to map the territory, make contact with inhabitants, and collect information for future (military or commercial) enterprises. While his wife, Sophie, remains in Vancouver, Forrester sets off with the intellectually gifted Pruitt and Sergeant Tillman, a rough-and-tumble miner’s son. Others joining the party include a trapper, his partner, a Native American woman who claims to have slit her husband’s throat, and a dog. But the strangest traveling companion, more nemesis than guide, is an old Native American known as the Man Who Flies on Black Wings, who is reputed to be a raven who can take the form of man. Bogged down by the terrain and his own ignorance, loosening ties to civilization if not reality, Pruitt succumbs to memories, and Forrester refuses to shoot wild geese fearing they may be humans in animal form. Sophie, meanwhile, learns to use a camera, building her own darkroom and a hunter’s blind to photograph bird nests in the wild. Years later, a descendant of the Forresters donates their journals and artifacts to a museum in the small town now on the expedition route, site of rafting tours and a million-dollar fishing lodge. In this splendid adventure novel, Ivey captures Alaska’s beauty and brutality, not just preserving history, but keeping it alive. –Publishers Weekly

The event is free and open to the public. Copies of To the Bright Edge of the World will be available for purchase.