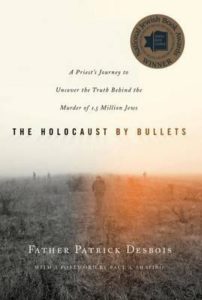 In his 2008 National Jewish Book Award-winning “The Holocaust by Bullets: A Priest’s Journey to Uncover the Truth Behind the Murder of 1.5 Million Jews,” Father Patrick Desbois documented for the first time the murder of 1.5 million Jews in the Ukraine during World War II.

Desbois will address the topic “A Voice of Conscience” as the featured speaker for the Tulsa Council for Holocaust Education and Tulsa City-County Library’s 21st Annual Yom HaShoah/Interfaith Holocaust Commemoration on Monday, April 9 at 7 p.m. at Tulsa Community College Southeast Campus, VanTrease Performing Arts Center for Education, 10300 E. 81st St. The public is invited to the free presentation, which is recommended for ages 12 and older.

Copies of “The Holocaust by Bullets” and “In Broad Daylight” will be for sale at the event.