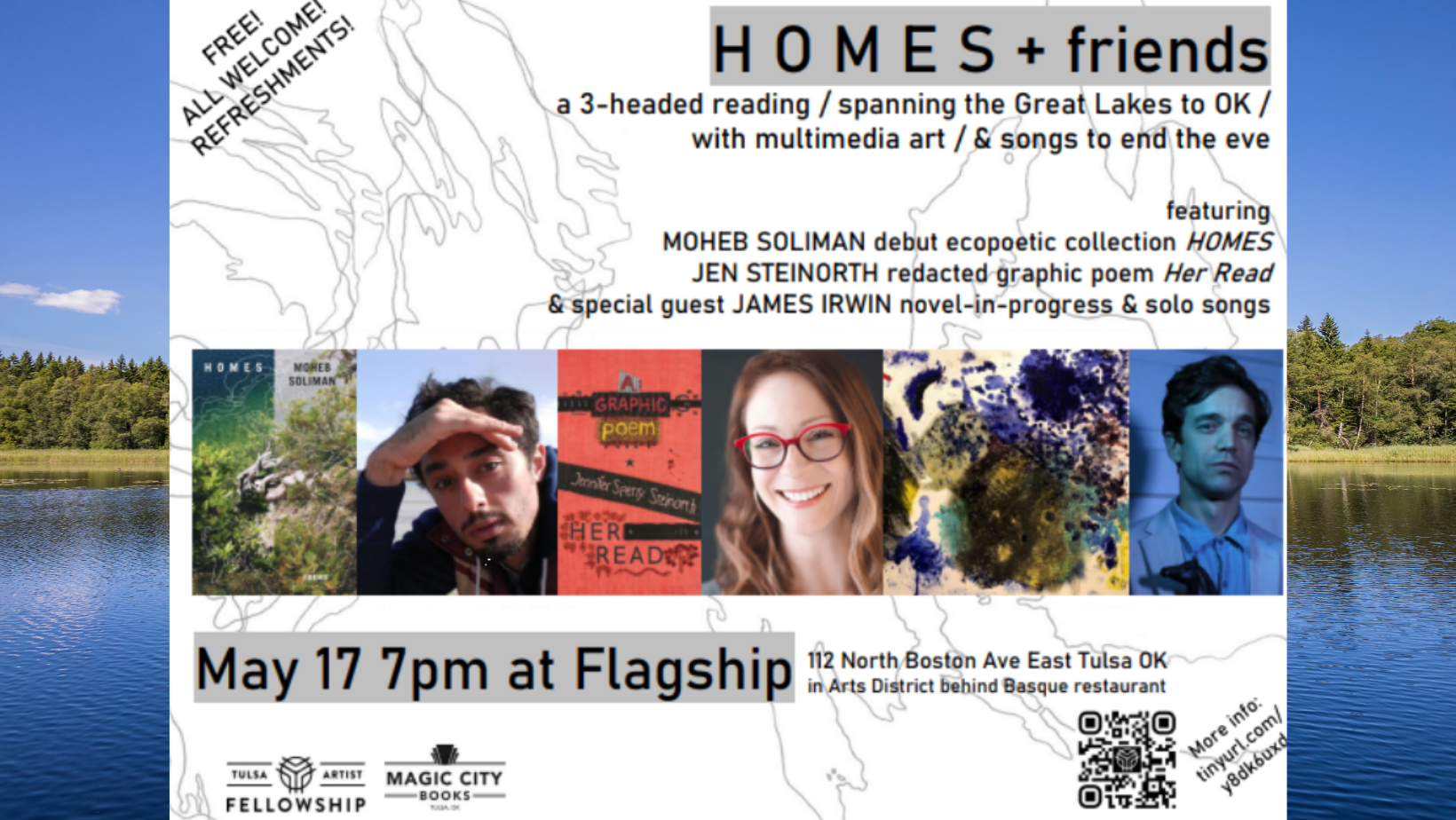 Tulsa Artist Fellowship and Magic City Books present interdisciplinary poet and TAF Fellow Moheb Soliman for a celebration of his recent debut collection, HOMES (Coffee House Press, 2021)—part post-modern nature poetry, part immigrant travelogue, dwelling in the natural-cultural sprawl of the Great Lakes region. Moheb will be joined by two visiting guests also from the Great Lakes, and also with close personal ties to Tulsa and Oklahoma. In addition to reading from and discussing their books and thematic intersections, together they will also consider issues of regionalism—both here and on the other side of the Midwest. As writers and artists with lives in Minnesota, Michigan, and Ontario, Canada, their far-flung but enduring relationships to Oklahoma offer insight on how selfhood and otherness are shaped by place.

The event will also feature:

> Collage and other artwork from Jen’s Her Read

MORE ON WRITERS AND PRESENTED WORK

Moheb Soliman immigrated to Stillwater, OK from Alexandria, Egypt with his family as a kid and spent the handful of extremely vivid childhood years here as ground zero America. He later lived in Ohio, Michigan, Minnesota, and Ontario before returning to Tulsa for the Tulsa Artist Fellowship curious to look at his family’s story from a now thoroughly Americanized, hybrid identity perspective. His book HOMES explores nature, modernity, identity, belonging, and sublimity in Middle America through the site of the Great Lakes bioregion/borderland.

Jen Steinorth was born in Tulsa and spent early years there and Houston. Her creative work is shaped by time spent in central Oklahoma near the Kansas border, where her family has farmed for over a century, and by the snow and waterscapes of northern lower Michigan where she now lives. She will present her award-winning book Her Read, A Graphic Poem is artifact of erasure at once poetry and visual art. In the tradition of reusing canvases, Steinorth appropriates a seminal text, The Meaning of Art by Herbert Read, and with the liberal use of correction fluid, scalpel and embroidery floss, transforms the book from male-centric art criticism into feminist verse.

After spending his early childhood in northwest rural Oklahoma, James Irwin has lived in and between Montreal and Toronto, Canada, two large cities of the Great Lakes waterway. He has recently reconnected with Oklahoma on trips for collaborative writing and music projects as well as research for his novel-in-progress, My Mother Is a Fish. The project traces the fallout of his mother’s involvement in a fringe Oklahoma religious community in the 1980, and the repercussions for James, his siblings, and their experience of home, place, and family. James’ solo music career holds a poetic, plainspoken beauty that over decade has shifted from outsider folk to low-fi 80s pop to indie rock and back.

Moheb Soliman is an interdisciplinary poet from Egypt and the Midwest. He has presented work at diverse literary, art, and public spaces in the US Canada, and abroad with support from the Joyce Foundation, Pillsbury House, Banff Centre, Minnesota State Arts Board, and others. He has degrees from The New School and the University of Toronto and lives in Minneapolis, Minnesota, where he was the program director for the Arab American lit and film organization Mizna before receiving a multi-year Tulsa Artist Fellowship. His debut poetry collection HOMES (Coffee House Press, 2021), about nature, modernity, identity, and belonging through the site of the Great Lakes region, has been a finalist for several awards and put him in Ecotone’s annual indie press shortlist and the Poets & Writers annual 10 debut poets feature. mohebsoliman.info

James Irwin writes songs, poems, and stories. He holds an MA in creative writing from the University of Toronto and will soon complete a novel titled My Mother Is a Fish about being abducted by his mother and taken to hide in a religious commune in Oklahoma as a child. He has published stories, essays, and poems in little magazines and been anthologized by Pistol Press. He has released seven albums of songs under his own name and under pseudonyms. Stars Blue Wheel, an album of cosmic country songs, was released in May 2020. jamesirwin.ca