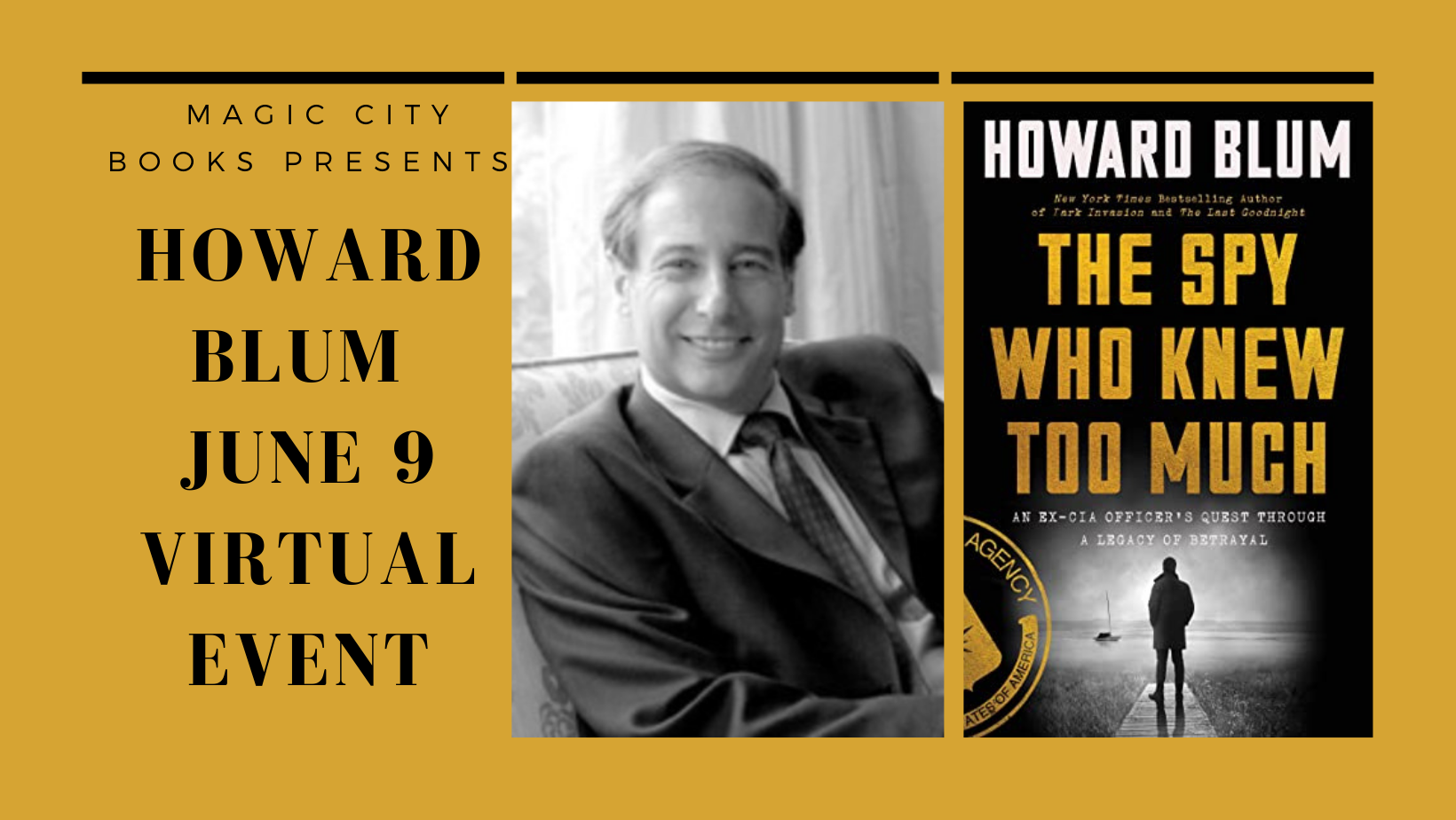 Magic City Books is proud to welcome Howard Blum for a free virtual event in celebration of his new book, The Spy Who Knew Too Much: An Ex-CIA Officer’s Quest Through a Legacy of Betrayal on Thursday June 9 at 7:00 pm. CT.

This free event will be hosted on the Zoom platform and Facebook Live. To register in advance for the event on Zoom visit, https://magiccitybooks.zoom.us/webinar/register/WN_xQeUzCzTQ3eKRVL7MZcOCA.

After registering, you will receive a confirmation email with details on how to join the event on Thursday, June 9 at 7:00 pm CT.

The Spy Who Knew Too Much will be published on June 7. You can pre-order a copy from Magic City Books by calling the store, 918-602-4452 or online at: https://magiccitybooks.square.site/product/the-spy-who-knew-too-much/771.

About The Spy Who Knew Too Much:

On a sunlit morning in September 1978, a sloop drifts aimlessly across the Chesapeake Bay. The cabin reveals signs of a struggle, and “classified” documents, live 9 mm cartridges, and a top-secret “burst” satellite communications transmitter are discovered aboard. But where is the boat’s owner, former CIA officer John Paisley?

One man may hold the key to finding out. Tennent “Pete” Bagley was once a rising star in America’s spy aristocracy, and many expected he’d eventually become CIA director. But the star that burned so brightly exploded when Bagley—who suspected a mole had burrowed deep into the agency’s core—was believed himself to be the mole. After a year-long investigation, Bagley was finally exonerated, but the accusations tarnished his reputation and tainted his career.

When Bagley’s daughter Christina, a CIA analyst, married another intelligence officer who was the son of the man who had played a key role in the investigation into Bagley, it caused a painful rift between the two. But then came Paisley’s strange death. A murder? Suicide? Or something else? Pete, now a retired spy, launches his own investigation that takes him deep into his own past and his own longtime hunt for a mole. What follows is a relentless pursuit to solve a spy story—and an inspiring tale of a man reclaiming his reputation and his family. It’s a very personal quest that leads to a shocking conclusion.

Howard Blum is the author of the New York Times bestseller and Edgar Award–winner American Lightning, as well as Wanted!; The Gold of Exodus; Gangland; The Floor of Heaven; The Last Goodnight, In the Enemy’s House, which was a New York Times Notable Book; and most recently Night of the Assassins. While at the New York Times, he was twice nominated for a Pulitzer Prize for investigative reporting. He is the father of three children, and lives in Connecticut.