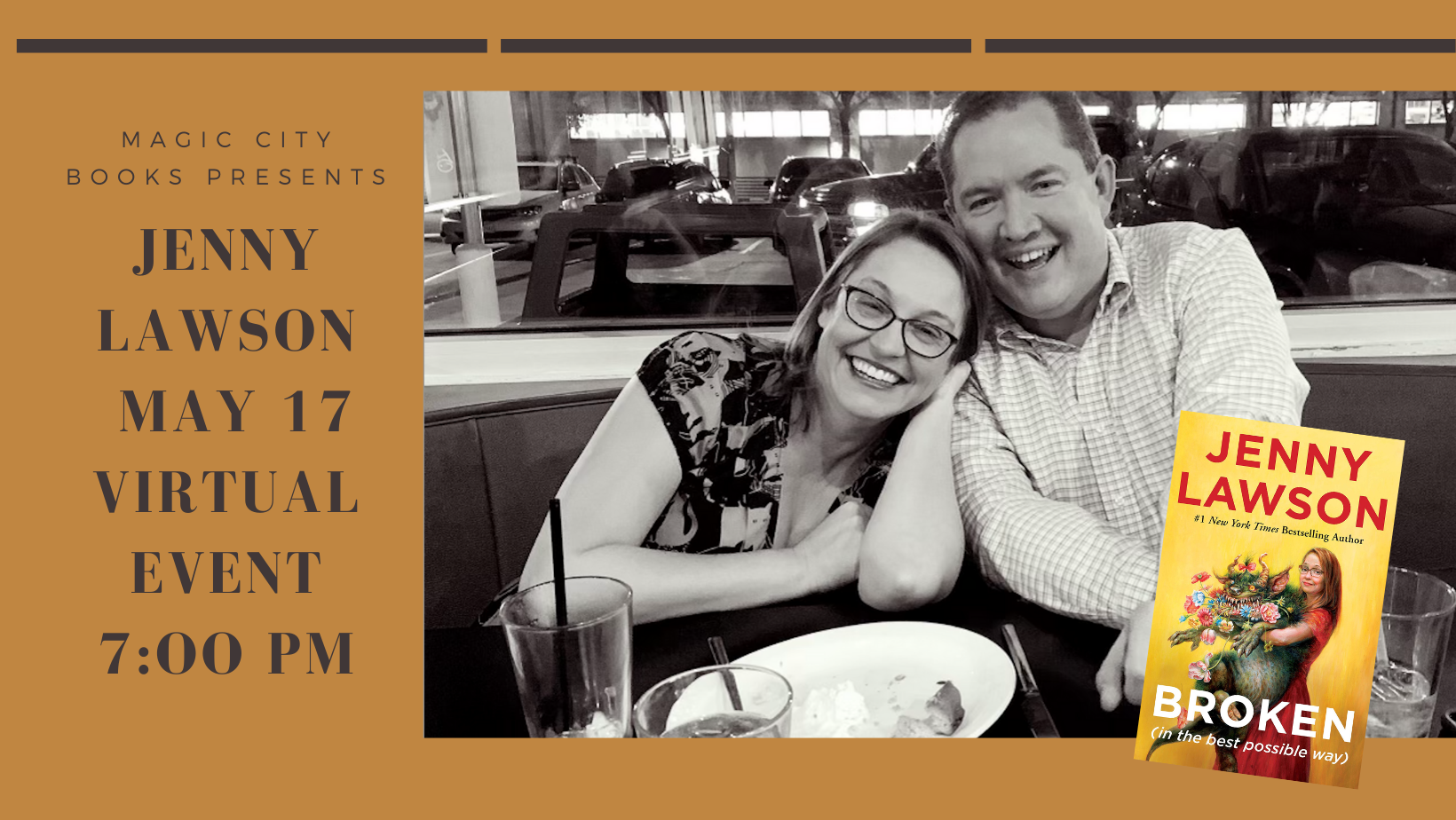 Magic City Books and Henry Holt are honored to present, for the first time ever, an evening with Jenny Lawson in conversation with her comedic foil/husband Victor to celebrate the paperback launch of the New York Times bestseller Broken (in the best possible way). Join us on May 17 at 7 PM CT on Zoom Webinar to discuss her most personal book yet. The conversation will be followed by moderated audience Q&A.

This free event will be hosted on the publisher’s Zoom account and audience members will be joining from bookstores around the country. To register for the free event visit: https://macmillan-publishers.zoom.us/webinar/register/WN_Sin-iJiBQcaek_RI8nwwbQ.

Broken (in the Best Possible Way) is out in paperback now. You can purchase a copy at Magic City Books or order online at: https://magiccitybooks.square.site/product/broken-in-the-best-possible-way-/749. The publisher is sending signed bookplates for the first twenty customers that order a copy of the book. Books will ship out when the bookplates arrive.

About Broken (in the Best Possible Way)

As Jenny Lawson’s hundreds of thousands of fans know, she suffers from depression. In Broken, Jenny brings readers along on her mental and physical health journey, offering heartbreaking and hilarious anecdotes along the way.

With people experiencing anxiety and depression now more than ever, Jenny humanizes what we all face in an all-too-real way, reassuring us that we’re not alone and making us laugh while doing it. From the business ideas that she wants to pitch to Shark Tank to the reason why Jenny can never go back to the post office, Broken leaves nothing to the imagination in the most satisfying way. And of course, Jenny’s long-suffering husband Victor–the Ricky to Jenny’s Lucille Ball–is present throughout.

A treat for Jenny Lawson’s already existing fans, and destined to convert new ones, Broken is a beacon of hope and a wellspring of laughter when we all need it most.

Jenny Lawson is an award-winning humorist known for her great candor in sharing her struggle with mental illness. She lives in Texas with her husband and daughter and was constantly “buying too many books” (“Not a real thing,” she insists), so she decided to skip the middleman and just started her own bookshop, which also serves booze because books and booze are what magic is made of. She has previously written Let’s Pretend This Never Happened and Furiously Happy, both of which were #1 New York Times bestsellers. She also wrote You Are Here, which inexplicably made it onto the New York Times bestseller list in spite of the fact that it was basically a very fun coloring book. She would like to be your friend unless you’re a real asshole. And yes, she realizes that this whole paragraph is precisely the reason she shouldn’t be allowed to write her own bio.

Victor Lawson is a successful business man who has been married to Jenny for 25 years and still hasn’t figured her out. Some would call that “keeping the mystery in a relationship.” He agrees but would still like to know a few things, including why he just opened a box of eyeballs. Although Jenny is known for her written humor, most people agree that Victor is the funny one IRL, which is very confusing to everyone involved.