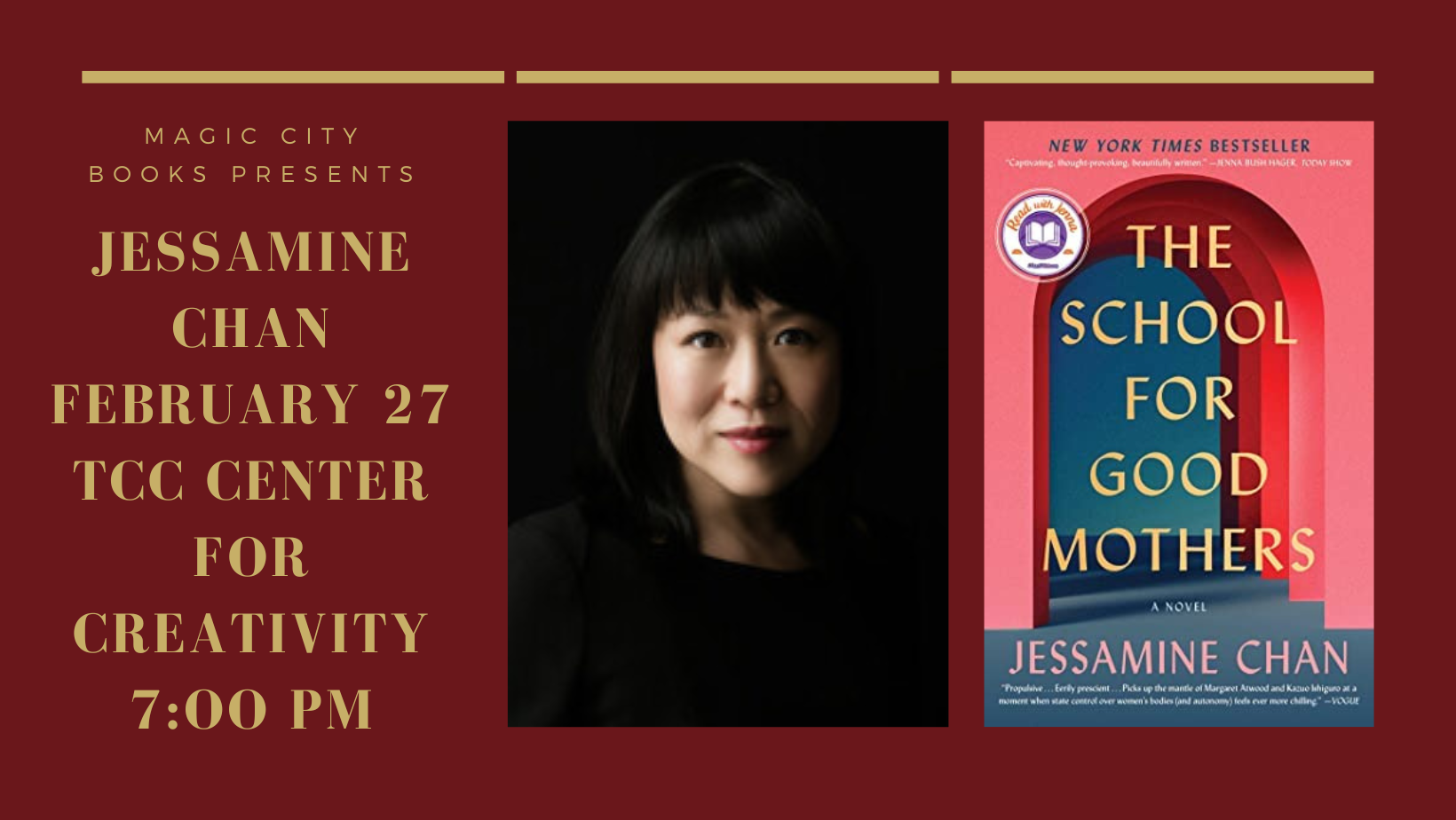 Magic City Books is thrilled to welcome Jessamine Chan for an in-person event to celebrate the paperback release of her best selling and award winning debut novel, The School for Good Mothers, on Monday, February 27 at 7:00 pm in the McKeon Center for Creativity (910 S. Boston Avenue).

In The School for Good Mothers, a New York Times bestseller and Today show Read with Jenna Book Club Pick, one lapse in judgement lands a young mother in a government reform program where custody of her child hangs in the balance, in this “surreal” (People), “remarkable” (Vogue), and “infuriatingly timely” (The New York Times Book Review) debut novel.

Jessamine Chan will be joined in conversation by Magic City Books bookseller, Kelly Brown. This free event will include a book signing at the end of the conversation. Copies of The School for Good Mothers are available now in hardcover and it will be published in paperback on February 7, 2023. You can order a copy online to have signed and shipped out after the event: https://magiccitybooks.square.site/product/the-school-for-good-mothers/990.

About The School for Good Mothers

Frida Liu is struggling. She doesn’t have a career worthy of her Chinese immigrant parents’ sacrifices. She can’t persuade her husband, Gust, to give up his wellness-obsessed younger mistress. Only with Harriet, their cherubic daughter, does Frida finally attain the perfection expected of her. Harriet may be all she has, but she is just enough.

Until Frida has a very bad day.

The state has its eye on mothers like Frida. The ones who check their phones, letting their children get injured on the playground; who let their children walk home alone. Because of one moment of poor judgement, a host of government officials will now determine if Frida is a candidate for a Big Brother-like institution that measures the success or failure of a mother’s devotion.

Faced with the possibility of losing Harriet, Frida must prove that a bad mother can be redeemed. That she can learn to be good.

An “intense” ( Oprah Daily), “captivating” ( Today) page-turner that is also a transgressive novel of ideas about the perils of “perfect” upper-middle class parenting; the violence enacted upon women by both the state and, at times, one another; the systems that separate families; and the boundlessness of love, The School for Good Mothers introduces, in Frida, an everywoman for the ages. Using dark wit to explore the pains and joys of the deepest ties that bind us, Chan has written a modern literary classic.

Jessamine Chan‘s short stories have appeared in Tin House and Epoch. A former reviews editor at Publishers Weekly, she holds an MFA from Columbia University’s School of the Arts and a BA from Brown University. Her work has received support from the Elizabeth George Foundation, the Bread Loaf Writers’ Conference, the Wurlitzer Foundation, the Jentel Foundation, the Kimmel Harding Nelson Center, the Anderson Center, the Virginia Center for the Creative Arts, and the Ragdale Foundation. She lives in Philadelphia with her husband and daughter.