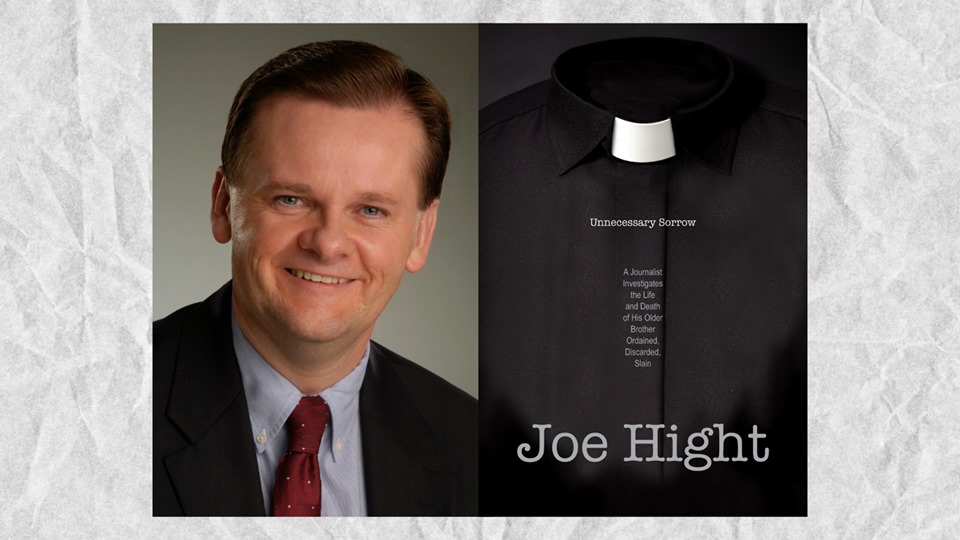 Please join Magic City Books and the Psychology Department at the University of Tulsa for the book launch of Unnecessary Sorrow by Joe Hight.

Against the backdrop of a father’s experiences in World War II and the hardships of the Great Depression’s Dust Bowl days, Paul Hight and his family take comfort in the routines of family, church, and rural life until a tragic accident shatters their lives. In the aftermath, the decision is made that the boy will become a priest, a priest for life—or so he and his family believe, and the Catholic Church teaches.

Yet when mental illness descends on Hight in his late twenties, instead of taking on his burden as it would a priest with cancer or heart disease, the church purges him from its priestly ranks. Once again, the world becomes an uncertain, dangerous place; only this time the voices taunt him and give orders he feels compelled to follow. While his family keeps Hight from ever becoming homeless, their help is not enough to keep him safe in the end. On his own doorstep, Hight is shot and killed in an encounter with police that is seen too often with those struggling with mental illness.

Haunted by his oldest brother’s death, journalist Joe Hight turns the skills that helped him lead a Pulitzer Prize-winning project on finding the truth about his brother’s exit from the priesthood and the breakdowns in the mental health care and criminal justice systems that contributed to his death. He seeks lessons from a senseless death in the hopes that such unnecessary sorrow might never happen again.

Joe Hight is a journalist, writer and educator who has spent his life in the pursuit of ways and stories to help and impact people’s lives. He helped found the Dart Center for Journalism and Trauma, now based at Columbia University. He has led and been involved in projects that have won numerous national awards, including the Pulitzer Prize in 2014. He’s written essays and chapters on trauma, journalism and ethics. He is the endowed chair of journalism ethics at the University of Central Oklahoma and director of the Oklahoma Journalism Hall of Fame in which he is also a member. He writes a column called “Oklahoma Joe,” a nickname he received in Colorado. He and his family own Best of Books, an independent bookstore in Edmond, Oklahoma. Unnecessary Sorrow is his first book.

A portion of the proceeds will benefit Mental Health Association Oklahoma. This event is free and open to the public.