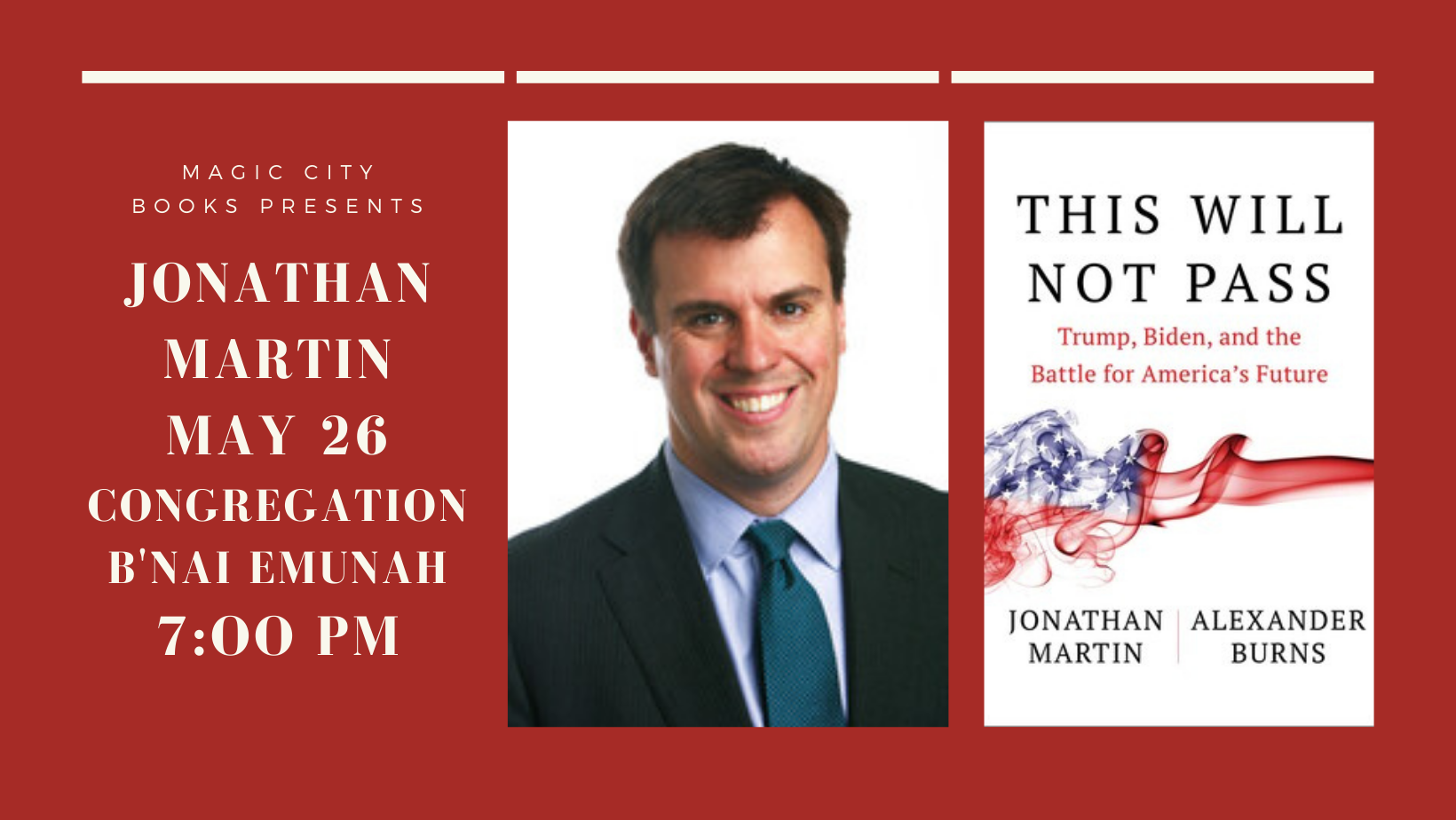 Magic City Books is proud to welcome natonal political correspondent for the New York Times, Jonathan Martin, for an in person program to celebrate his new book, This Will Not Pass: Trump, Biden and the Battle for America’s Future. This free event will take place on Thursday May 26 at 7:00 pm at Congregation B’nai Emunah (17th and Peoria).

Jonathan Martin and his co-author Alexander Burns have written the definitive account of the 2020 election and the first year of the Biden presidency. Martin will be in conversation with Magic City Books co-founder Jeff Martin to discuss democracy and the future of America.

This Will Not Pass is available now at Magic City Books or you can order online, https://magiccitybooks.square.site/product/this-will-not-pass/757. Copies will also be for sale at the event on May 26.

About This Will Not Pass: Trump, Biden, and the Battle for America’s Future

The shocking, definitive account of the 2020 election and the first year of the Biden presidency by two New York Times reporters, exposing the deep fissures within both parties as the country approaches a political breaking point.

This is the authoritative account of an eighteen-month crisis in American democracy that will be seared into the country’s political memory for decades to come. With stunning, in-the-room detail, New York Times reporters Jonathan Martin and Alexander Burns show how both our political parties confronted a series of national traumas, including the coronavirus pandemic, the January 6 attack on the Capitol, and the political brinksmanship of President Biden’s first year in the White House.

From Donald Trump’s assault on the 2020 election and his ongoing campaign of vengeance against his fellow Republicans, to the behind-the-scenes story of Biden’s selection of Kamala Harris as his running mate and his bitter struggles to unite the Democratic Party, this book exposes the degree to which the two-party system has been strained to the point of disintegration. More than at any time in recent history, the long-established traditions and institutions of American politics are under siege as a set of aging political leaders struggle to hold together a changing country.

Martin and Burns break news on most every page, drawing on hundreds of interviews and never-before-seen documents and recordings from the highest levels of government. The book asks the vitally important (and disturbing) question: can American democracy, as we know it, ever work again?

Jonathan Martin is a national political correspondent for The New York Times and a political analyst for CNN. He joined the Times in 2013 after working as a senior political writer for POLITICO. His work has been featured in The New Republic, The Washington Post, and The Wall Street Journal, among others. A native of Arlington, Virginia, Martin is a graduate of Hampden-Sydney College.