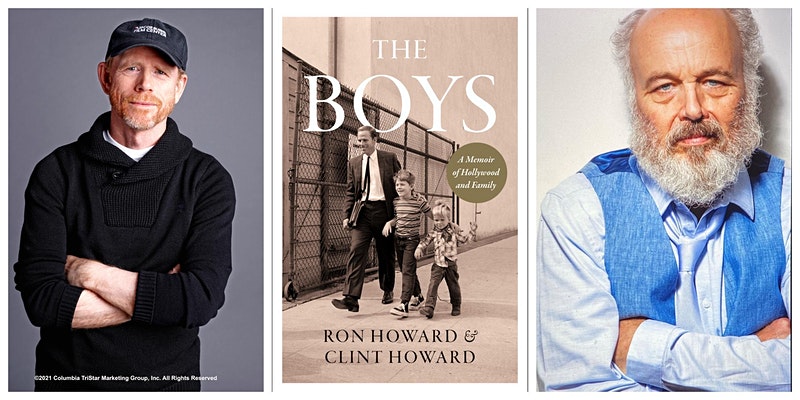 Magic City Books is a special partner for this special, exclusive event that will be in person in Los Angeles and also streamed virtually. To purchase your ticket to the virtual event, click here.

Their new memoir brings readers inside a childhood spent on TV, growing up amid sound stages, Hollywood legends and trained bears.

The Howard brothers rose to fame on popular shows of the 1960s and 70s: Ron Howard was turning six when he began playing Opie on “The Andy Griffith Show,” then went on to “Happy Days” and other roles before shifting to directing. Younger brother Clint starred on “Gentle Ben” on Sunday nights and appeared on other shows ranging from “The Mod Squad” to “Star Trek.”

In The Boys, Ron and Clint Howard reflect on the importance of family and share memories of their extraordinary childhood growing up on television. They also dig deeper, examining the industry with the perspective of life experience behind them.

Where: This in-person book club event will be held at L.A. Live’s Rooftop Terrace, a new outdoor venue atop the Grammy Museum in downtown Los Angeles.

**Tickets are also available to join this discussion virtually.

Tickets: L.A. Times subscribers receive discounted tickets for this book club event, which offers readers a choice of attending in person or virtually. All tickets include a copy of The Boys.

In-person Event: $50 Times Subscribers (with code); $60 for general public. Your ticket includes admission to the event and a six-month digital subscription to the Times for non-subscribers.

Virtual Event: $40 Times Subscribers (with code); $45 general public. Your ticket includes virtual admission to this event and a six-month digital subscription to the Times for non-subscribers.

Tickets are on sale now!

Questions about ticketing? Email us at eventinfo@caltimes.com