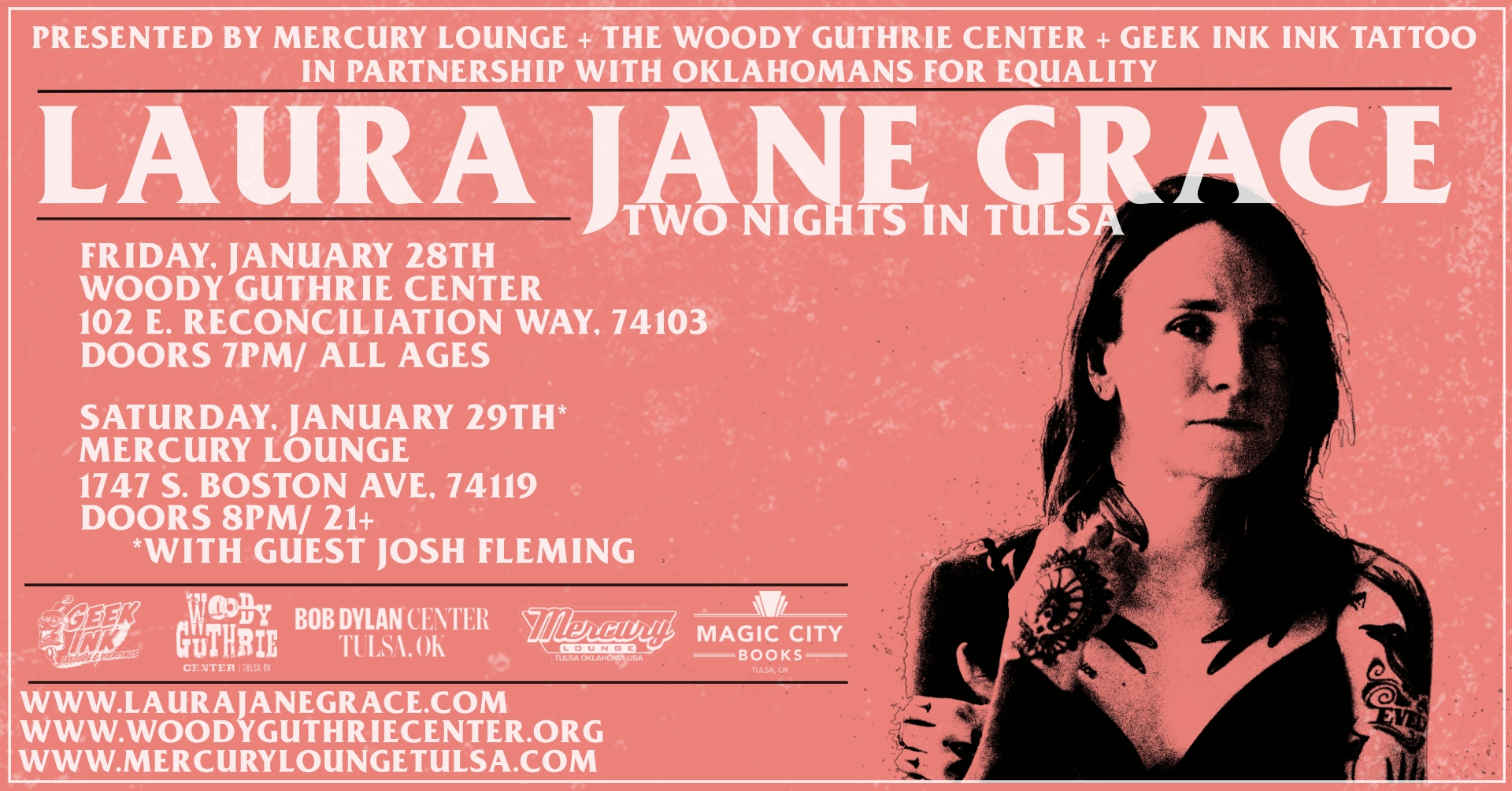 Night 1: 1/28/22 at The Woody Guthrie Center, featuring an intimate performance and discussion with on site representation from Oklahomans for Equality and moderation from Tulsa based folksinger/social activist Jillian Holzbauer and a pop up book store from Magic City Books. This event is All Ages. Tickets on sale here

The Woody Guthrie Center is a public museum and archive located in Tulsa, Oklahoma that is dedicated to the life and legacy of American folk musician and singer-songwriter Woody Guthrie.

Night 2: 1/29/22 at Mercury Lounge, featuring a headlining performance from Laura Jane Grace with support from Josh Fleming (of Vandoliers), and a pop up book store from Magic City Books the event is 21+. Tickets on sale here

Mercury Lounge is an American dive bar with a focus on roots music and the communities that form around it. We’re committed to providing a safe space for music fans, a professional experience for the working musician and a fast drink for a fair price.

TICKETS FOR EACH NIGHT SOLD SEPARATELY. PROOF OF VACCINATION OR NEGATIVE COVID19 TEST FROM PREVIOUS 72 HOURS AND USE OF MASK REQUIRED

About Tranny: Confessions of Punk Rock’s Most Infamous Anarchist Sellout

ONE OF BILLBOARD’S 100 GREATEST MUSIC BOOKS OF ALL TIME: The provocative transgender advocate and lead singer of the punk rock band Against Me! provides a searing account of her search for identity and her true self.

It began in a bedroom in Naples, Florida, when a misbehaving punk teenager named Tom Gabel, armed with nothing but an acoustic guitar and a headful of anarchist politics, landed on a riff. Gabel formed Against Me! and rocketed the band from its scrappy beginnings-banging on a drum kit made of pickle buckets-to a major-label powerhouse that critics have called this generation’s The Clash. Since its inception in 1997, Against Me! has been one of punk’s most influential modern bands, but also one of its most divisive. With every notch the four-piece climbed in their career, they gained new fans while infuriating their old ones. They suffered legal woes, a revolving door of drummers, and a horde of angry, militant punks who called them sellouts and tried to sabotage their shows at every turn.

But underneath the public turmoil, something much greater occupied Gabel-a secret kept for 30 years, only acknowledged in the scrawled-out pages of personal journals and hidden in lyrics. Through a troubled childhood, delinquency, and struggles with drugs, Gabel was on a punishing search for identity. Not until May of 2012 did a Rolling Stone profile finally reveal it: Gabel is a transsexual, and would from then on be living as a woman under the name Laura Jane Grace.

Tranny is the intimate story of Against Me!’s enigmatic founder, weaving the narrative of the band’s history, as well as Grace’s, with dozens of never-before-seen entries from the piles of journals Grace kept. More than a typical music memoir about sex, drugs, and rock ‘n’ roll-although it certainly has plenty of that- Tranny is an inside look at one of the most remarkable stories in the history of rock.

Laura Jane Grace At War With The Silverfish

“These are songs of late night madness and loneliness, orphan songs that came wandering in looking to feed like insects,” Laura Jane Grace says of her new EP. Half recorded at Grace’s TinyQuietStudio in Chicago and half recorded at Electric Eel in St. Louis, and mixed by her Devouring Mothers bandmate Marc Hudson, At War With The Silverfish finds Grace in a range of stripped-back, poignant modes that amount to an honest and holistic account of our shared humanity. Unafraid to spotlight open wounds and tangled feelings, Grace conveys the distinctive pluck that has defined her work with Against Me! and The Devouring Mothers, but with the intimate energy of home recording with an acoustic guitar. The album is not a clarion call, but a tender invitation. It is a necessary capsule of a woman’s artistic pulse; love, longing and loneliness told in affecting turns of phrase. “Three of hearts/Two of them are broken/One of them is gold/All of them are worthless,” she sings on opener “Three of Hearts,” admitting later that she’s the “…surest sucker that you’ll ever see.” This vulnerable posture drives much of that album, like on “Lolo 13,” where Grace pines for a love she never had, and on “Yesterday Pt. II,” where she remembers a lover’s goodbye with visceral intensity. “I know I sound insane,” she repeats three times on the latter, imparting anxiety and resolve at once. It’s a device she employs through the record, deftly illustrating the mental gymnastics on the roads to self doubt and self acceptance. Amid the emotional outpouring are piercing scenes of isolated domestic life — the endless cups of reheated java (“Day Old Coffee”), the relief of reconnecting with an old friend (“Electro-Static Sweep”). And then there is her old friend, Chicago, a city by now her home but not without its pain points. “Way out here on the edge of oblivion/May as well be Skokie, you’d have been so lucky for Berwyn,” she sings on “Long Dark Night,” surveying the landscape of her new Northside home, not the “hip” part of town but one vital to its cultural diversity. Reflecting on the album’s interiority, Grace acknowledges the universal nature of many of its themes — how her highly personal accounts bloom into broader human connection. “I’ve learned that if you share your experience with good intentions that the universe will always surprise you with abundant return,” she says. “Every song is an act of faith; you don’t necessarily know why you’re singing it other than you know you’ve got to sing it.”