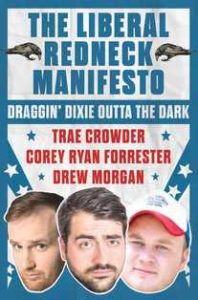 Stand-up comedy and writing partners, Trae Crowder, Drew Morgan and Corey Ryan Forrester are touring nationally in support of their book,
Liberal Redneck Manifesto: Draggin Dixie Outta the Dark. Being wellRED is about celebrating all that’s good about the South while leading the Redneck Revolution and standing proudly blue in a sea of red.

Trae Crowder is earning national attention (or notoriety, depending on your viewpoint) for his “Liberal Redneck” series of viral videos, Trae Crowder has been performing his particular brand of Southern-fried intellectual comedy in the Southeast and beyond for the past six years. Trae is also a writer and is currently a member of NBC Universal’s Talent Infusion Program after being invited to their prestigious Late Night Writer’s Workshop in 2015.

Corey Forrester has been writing and performing stand up comedy since the age of sixteen …before he could legally work in a comedy club. His North Georgia roots have given him an affinity for Southern wit and storytelling. He may often wear a PBR hat, but don’t assume there is anything blue collar about him. Corey has thoughts on everything from race to religion, politics and gender. He loves women and cheese. Actually, all dairy.

Hailing from rural East Tennessee, Drew Morgan draws on his experiences as a small-town son of a preacher man and former public defender who has lived in South Africa, Australia, Miami, Boston, and (currently) New York City. Weaving his stories together with observations on culture, religion, and identity, he’s like Mark Twain on acid, or maybe just a confused Southerner pretending to have his shit together. He is a good dancer.

This is a Cain’s Ballroom ticketed event. You may purchase tickets at www.cainsballroom.com. Copies of The Liberal Redneck Manifesto will be available for purchase at the event.