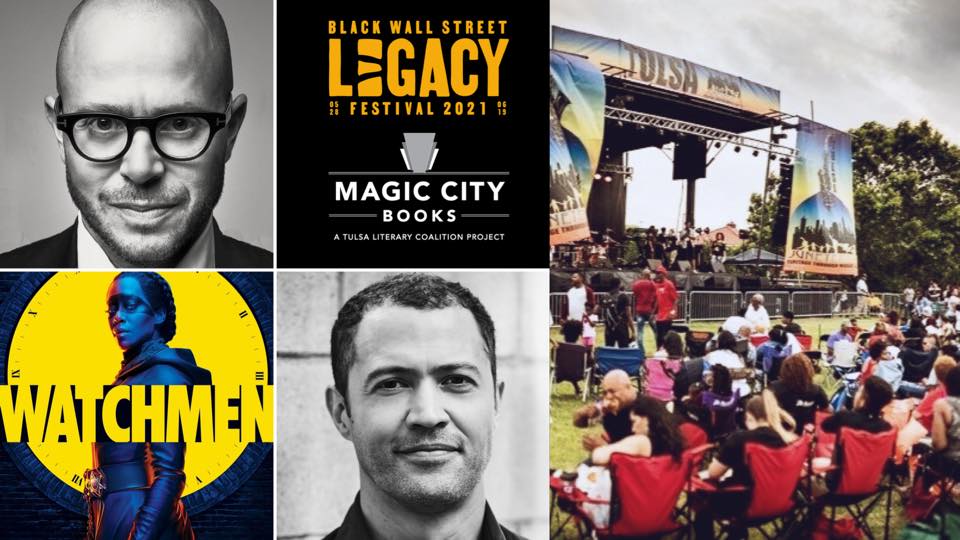 In partnership with Magic City Books, the Black Wall Street Legacy Festival will welcome HBO’s “Watchmen” creator Damon Lindelof and Emmy Award-winning “Watchmen” writer Cord Jefferson for a shared experience, conversation, and screening on May 30. The first scene of “Watchmen” depicted the horror of the 1921 Tulsa Race Massacre — the murder of hundreds of Black men, women, and children, and the destruction of Tulsa’s Greenwood neighborhood, including 1,500 Black-owned homes and businesses, and places of worship, healing, learning, and community gathering. Unlike in the TV series, reparations have still not been paid and justice has never been served for the massacre’s three living survivors and their descendants, even 100 years later.

Following the screening, Lindelof and Jefferson will have a live conversation with a descendant of the massacre. “Watchmen began as literature, a piece of writing that inspired us to ask what buried parts of history could be uncovered to reveal that America hasn’t come nearly as far as it claims to,” Lindelof and Jefferson said in a joint statement. “The horrific massacre and plunder of Black Wall Street felt in many ways like a superhero’s origin story, the destruction of a utopia in its prime; and a century later, Tulsa felt like the perfect place to ask why so few of those superheroes are people of color. Greenwood is hallowed, sacred ground for everyone who worked on Watchmen and we are absolutely honored to come and pay our respects in person for the Centennial.

DAMON LINDELOF was born in New Jersey to a schoolteacher and a banker. He was also born a writer, although it would take over 25 years to figure that out. In 2004 he partnered with J.J. Abrams to create LOST. No, they were not dead the whole time. Since Damon left the island, he has worked as a writer and producer on STAR TREK, PROMETHEUS, STAR TREK INTO DARKNESS, WORLD WAR Z, TOMORROWLAND and most recently THE HUNT. Returning to TV in 2014 Damon spent three seasons showrunning HBO’s critically-acclaimed THE LEFTOVERS, which he fiercely defends as “not as depressing as everyone says.” Currently he is wrapping up the HBO series WATCHMEN, the groundbreaking graphic novel he adored from his childhood which he is desperately hoping not to screw up. Damon also wrote this bio.
CORD JEFFERSON is a TV writer and producer originally from Tucson, Arizona. His TV credits include Watchmen, The Good Place, Succession, Master of None, and The Nightly Show. His journalism has appeared in or on National Geographic, The New York Times, The New York Times Magazine, Matter, Bookforum, New York Magazine, The Awl, ESPN the Magazine, USA Today, The Daily Beast, and various other publications. For two years he served as the west coast editor at Gawker. Prior to that, he was the senior editor at GOOD magazine. You may have heard him talking on NPR, where he used to review books, or on WNYC, the CBC, the BBC, CNN, RT, MSNBC, or HBO, where he’s appeared as a correspondent on the documentary series Vice.
+ Google Calendar+ Add to iCalendar