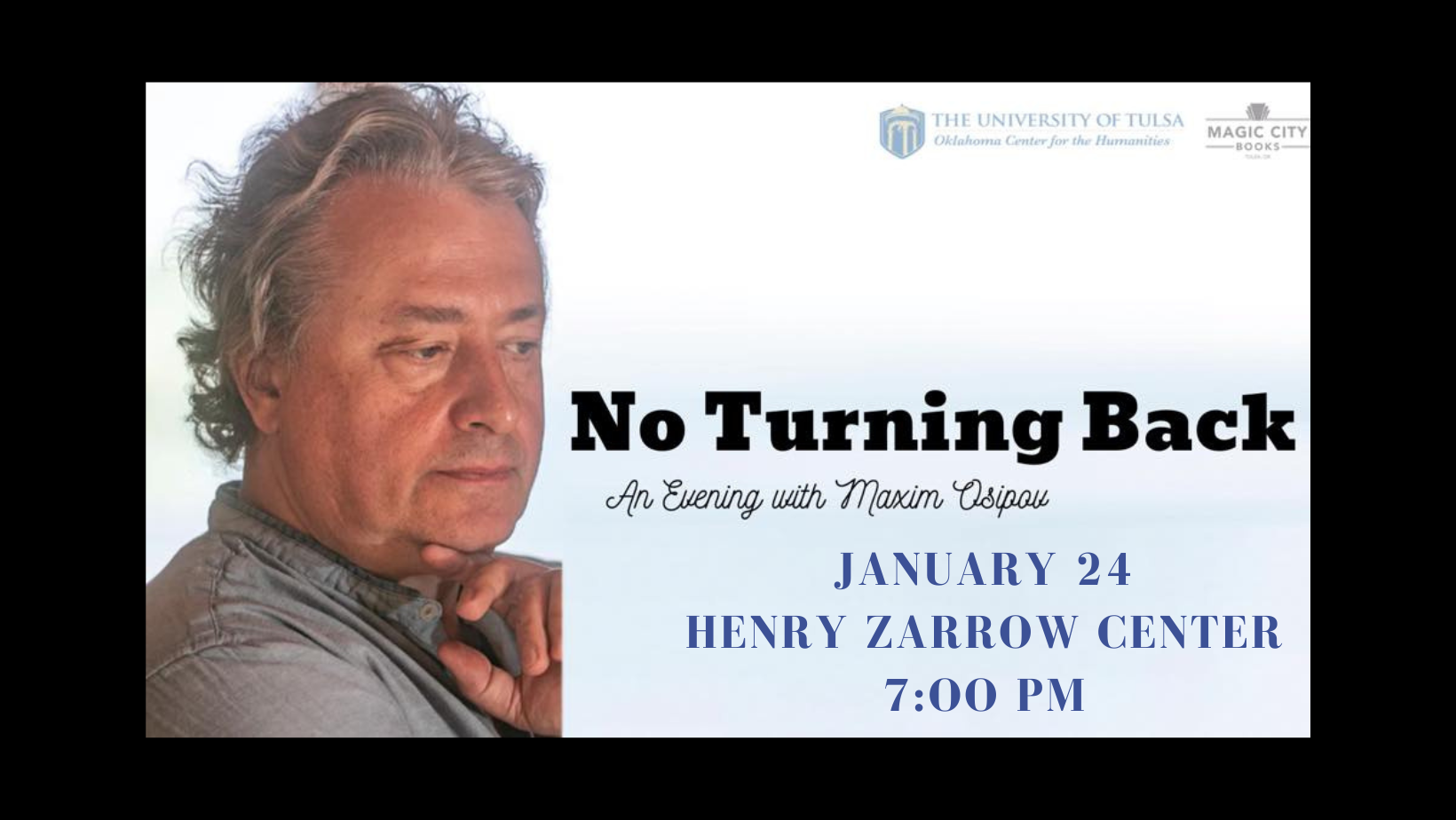 Magic City Books and the Oklahoma Center for the Humanities are proud to welcome Maxim Osipov for a free, in-person event at 7:00 pm on Tuesday January 24 at the Henry Zarrow Center for Art and Education (124 E. Reconciliation Way).
Maxim Osipov is known for his uncompromisingly honest and introspective stories of life in the provinces of Putin’s Russia, in Moscow, and among Russophone émigrés abroad. Shortly after the launch of Russia’s full-scale invasion of Ukraine in February 2022, Osipov himself became an émigré, leaving Russia for good. His latest collection of stories and essays in English, Kilometer 101 (NYRB Classics), serves as a kaleidoscopic chronicle of Russia’s descent from 2007 through the days leading up to the disastrous events of 2022. He will read from the book and discuss literature and politics with Boris Dralyuk, Presidential Professor of English at the University of Tulsa, the book’s editor and co-translator.
Copies of Kilometer 101 and Rock, Paper, Scissors (the first English translation of Osipov’s short stories) will be available for sale at the event and a book signing will follow the program.
If you are unable to attend the event and would like to order a signed copy, you can order online:
Kilometer 101: https://magiccitybooks.square.site/product/kilometer-101/975
Rock, Paper, Scissors: https://magiccitybooks.square.site/product/rock-paper-scissors/974
This event is sponsored by the Oklahoma Center for the Humanities and Magic City Books. It is free and open to the public. You can attend virtually by registering here, https://utulsa.zoom.us/meeting/register/tJ0ofuygqTkvEtCb7JSmTN1oNV89EdkoaLH8?fbclid=IwAR1dBFO5SY0iBlfyLkk82e-ALTKHr-V_MaIr8b57e8P4WTX9wobVZX8XJWg

Maxim Osipov (b. 1963) is a Russian writer and cardiologist. In the early 1990s he was a research fellow at the University of California, San Francisco, before returning to Moscow, where he continued to practice medicine and also founded a publishing house that specialized in medical, musical, and theological texts. In 2005, while working at a local hospital in Tarusa, a small town ninety miles from Moscow, Osipov established a charitable foundation to ensure the hospital’s survival. Since 2007, he has published short stories, novellas, essays, and plays, and has won a number of literary prizes for his fiction. He has published six collections of prose, and his plays have been staged all across Russia. Osipov’s writings have been translated into more than a dozen languages. He lived in Tarusa up until February 2022, when he moved to Germany.

Boris Dralyuk is a poet, a translator, and the Editor-in-Chief of the Los Angeles Review of Books. He is a translator of Maxim Osipov’s Rock, Paper, Scissors and Other Stories, Lev Ozerov’s Portraits Without Frames, and a co-translator of Pushkin’s Peter the Great’s African, all published by NYRB Classics.