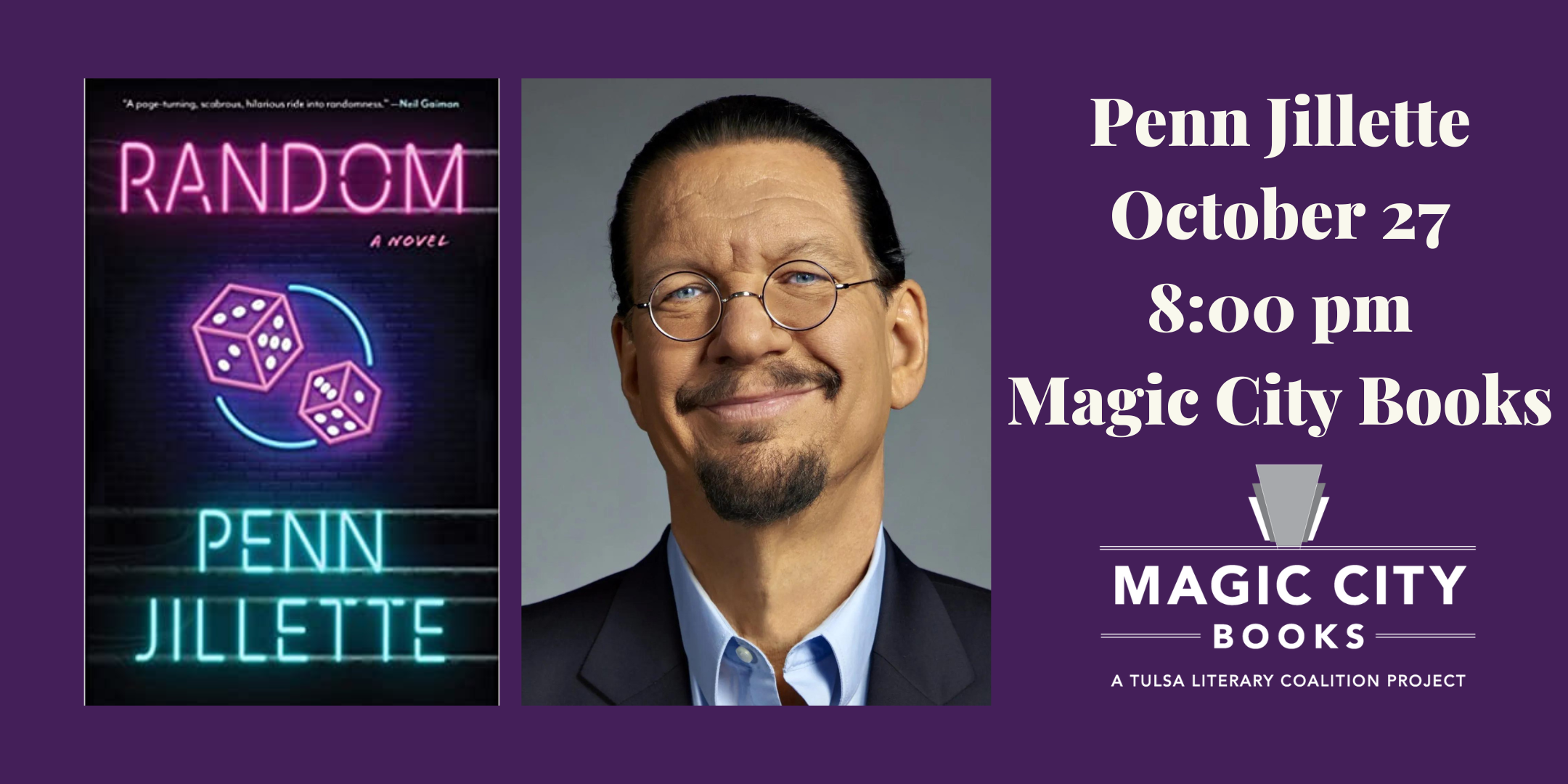 Magic City Books and Doc Roc present a rocking night of conversation and books with Penn Jillette of the legendary magic duo Penn & Teller. Penn’s latest novel, Random, is a rollicking crime caper that will bend your mind like a spoon.

This ticketed event will be held at Magic City Books. Each ticket includes one (1) signed copy of  Random by Penn Jillette and one (1) seat at the event. There is a limit of 8 tickets per transaction and all books will be available for pick-up at the event. Doors open at 7:00 pm and the program will begin at 8:00 pm.

If you have a ticket and are unable to attend the event, you will be able to pick up your book at Magic City Books during normal business hours. The last day for ticket holders to pick up Random by Penn Jillette is Friday, December 9, 2022. We will make an effort to have signed books available for pick up but can not guarantee a signed copy.

Two weeks before his twenty-first birthday, Las Vegas native Bobby Ingersoll finds out he’s inherited a crushing gambling debt from his scumbag father. The debt is owed to an even scummier bag named Fraser Ruphart who oversees his bottom-rung criminal empire from the classy-adjacent Trump International Hotel. Bobby’s prospects of paying off the note, which comes due the day he turns twenty-one, are about as dim as the sign on the hotel’s facade.

The two weeks pass in the blink of a (snake) eye, but before Bobby’s luck runs out, he stumbles upon enough cash to pay off Ruphart and change his family’s fortune. More importantly, he finds himself with a new, for lack of a better word, faith.

Bobby does not consign his big break to a “higher power”–what Penn Jillette hero ever could? Instead, he devises and devotes himself to Random, a philosophy where his life choices are based entirely on the roll of his “lucky” dice. What follows is a rollicking exploration into not so much what defines us as what divines us when we give over every decision–from what to eat to whom to marry to how or when to die–to the random fall of two numbered cubes.

Random combines the intellectual curiosity of Richard Dawkins with the humor and grit of an Elmore Leonard antihero. Jillette’s up-on-his-luck Ingersoll is the character we need to help us navigate the chaos of the post-truth era.

Well, unless his roll runs cold.

“Penn Jillette is an atheist, triple-goddamned lunatic, and his book is a glorious Las Vegas lunatic paean to chance and adventure—a page-turning, scabrous, hilarious ride into randomness.”
—Neil Gaiman

Penn Jillette is a cultural phenomenon as a solo personality and as half of the world-famous Emmy Award-winning magic duo Penn & Teller, whose live show spent years on Broadway and is now the longest-running headlining show in Las Vegas. The pair have their own star on the Hollywood Walk of Fame. Jillette cohosted the Showtime series Penn & Teller: Bullshit! which was nominated for thirteen Emmy Awards and won him a Writers Guild Award. He currently cohosts the CW Network competition series Penn & Teller: Fool Us! which was nominated for a 2017 Critics’ Choice Award. His weekly podcast, Penn’s Sunday School, was the number one downloaded podcast on iTunes during its debut week and was named by iTunes as Best New Comedy Podcast. He is the author of numerous books, including the nonfiction New York Times best-selling books Presto!: How I Made Over 100 Pounds Disappear and Other Magical Tales and God No!: Signs You May Already Be an Atheist and Other Magical Tales; the novel Sock; and the essay collection Every Day Is an Atheist Holiday!