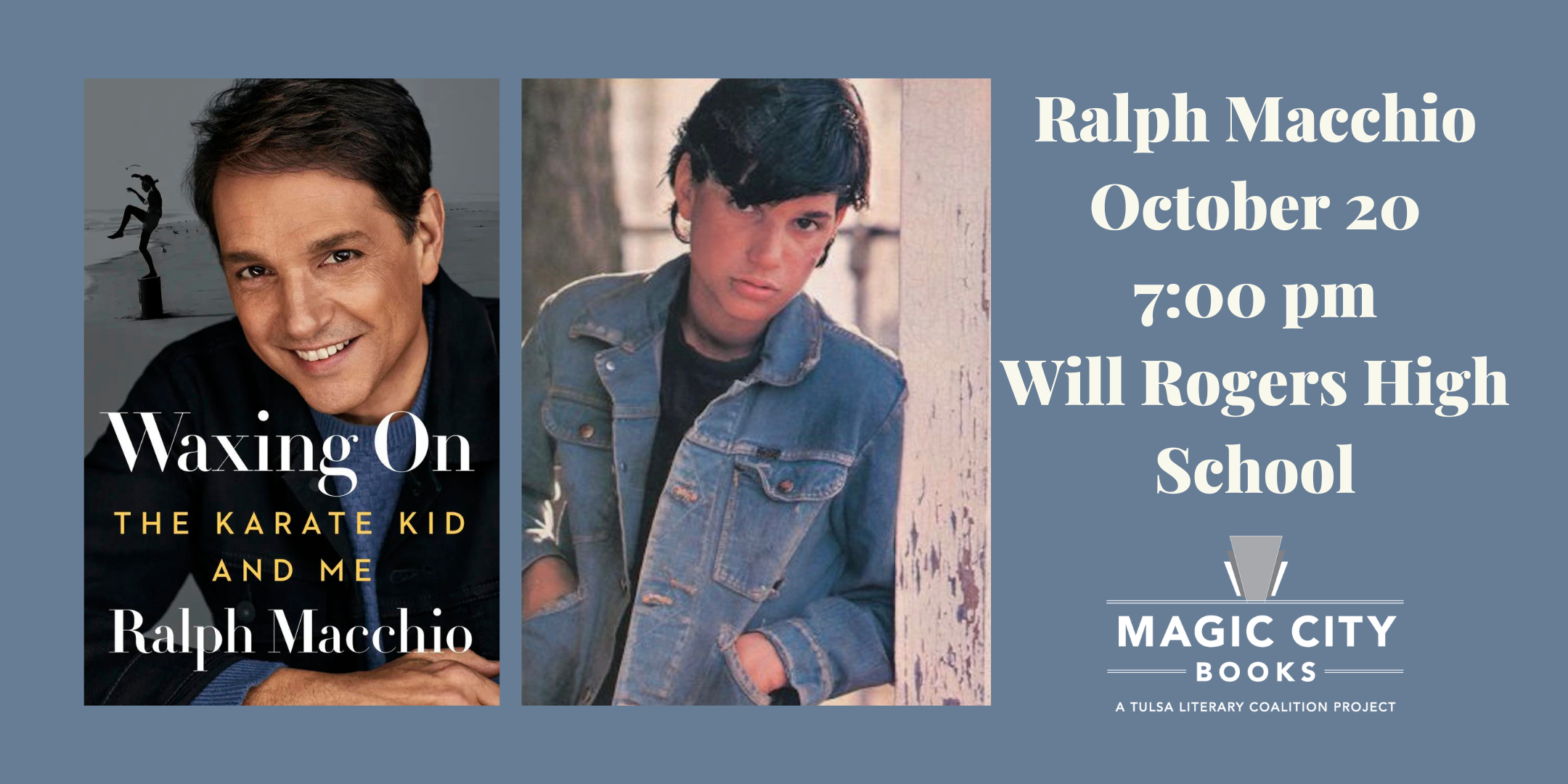 Magic City Books is proud to welcome beloved actor Ralph Macchio for an exclusive, in-person event celebrating the release of his memoir, Waxing On on Thursday October 20. Joining Ralph Macchio in conversation will be the author of The Outsiders, S.E. Hinton.

Waxing On is a fun-filled memoir by the Karate Kid and Cobra Kai actor that’s equal parts nostalgia and contemporary relevance, based on both the classic movies and his current show, which is Netflix’s #1 hit and gaining legions of new fans from every generation.

This is a ticketed event, each ticket includes one (1) copy of Waxing On by Ralph Macchio ($28.00 value) and one (1) seat at the event on Thursday October 20 at 7:00 pm. The event will be held in the beautiful art deco auditorium at Will Rogers High School.

All tickets include a copy of the book, there is a limit of four tickets per transaction. Please provide the full name and email address of each ticket holder so that all event notifications and information can be sent to all attendees.

All books will be signed in advance by Ralph Macchio and available for pickup at the event. At the conclusion of the event, there will be an opportunity to have a photo with Mr. Macchio. A professional photographer will be on site to take photos, no personal photography will be allowed. There is no additional charge for a photo with Ralph Macchio.

If you have a ticket and are unable to attend the event, you will be able to pick up your book at Magic City Books during normal business hours. The last day for ticket holders to pick up Waxing On by Ralph Macchio is Friday, December 2, 2022. We will make an effort to have signed books available for pick up but can not guarantee a signed copy.

Since The Karate Kid first crane-kicked its way into the pop culture stratosphere in June of 1984, there hasn’t been a week Ralph Macchio hasn’t heard friendly shouts of “Wax On, Wax Off” or “Sweep the Leg!” Now, with Macchio reprising his role as Daniel LaRusso in the #1 ranked Netflix show, Cobra Kai, Ralph Macchio is finally ready to look back at the movie that came to define him and give the fans something they’ve long craved.

The book will be Ralph Macchio’s joyful and celebratory reflection on the legacy of The Karate Kid in film, pop culture, and his own life. It will be a comprehensive look at a film that shaped him as much as it influenced the world. Macchio will share the untold story behind his starring role—the innocence of the early days, the audition process, and the filmmaking experience itself –as well as take readers through the birth of some of the film’s most iconic moments.

Overall, this is a nostalgic story that will bring readers back to the day they first met Daniel LaRusso, Johnny Lawrence, and Mr. Miyagi for the first time, but also provides a fascinating lens into how our pasts shape all of us, and how the past can come back to enrich one’s life in powerful, surprising, and wonderful ways.

An actor, producer, director with an extensive list of credits, Ralph Macchio is best known for his celebrated performance as Johnny in Frances Ford Coppola’s The Outsiders; the hit film My Cousin Vinny; and most notably for the title role in the popular classic The Karate Kid and its successors. Expanding further on the Karate Kid Universe, Ralph continues to reprise his iconic role of Daniel LaRusso in the hit Netflix series Cobra Kai. He lives on Long Island with his family.