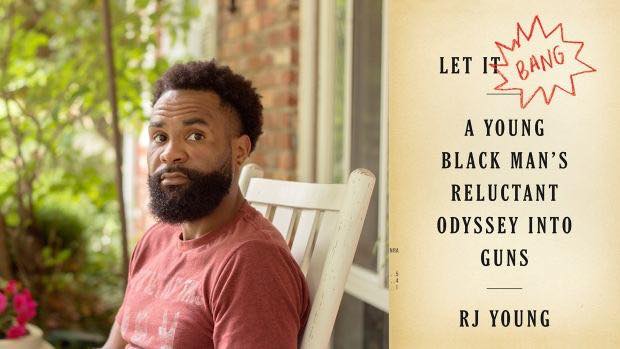 Join us for the official book launch event for RJ Young. Let it Bang chronicles the quest, funny and searing, of a young man black man learning to shoot—a fascinating odyssey into race, guns, and self-protection in America

The most RJ Young knew about guns was that they could get him killed. Until, recently married to a white woman and in desperate need of a way to relate to his gun-loving father-in-law, Young does something that he would have thought unimaginable: he accepts Charles’s gift of a Glock.

Young determines to get good, really good, with a gun. Let It Bang is the compelling story of the author’s unexpected obsession—he eventually becomes an NRA-certified pistol instructor—and of his deep dive into the heart of America’s gun culture.

Let It Bang is an utterly original look at American gun culture from the inside, and from the other side—and, most movingly, the story of a young black man’s hard-won nonviolent path to self-protection.

This event is free and open to the public, copies of Let it Bang will be available for sale at the event and at Magic City Books starting October 23.