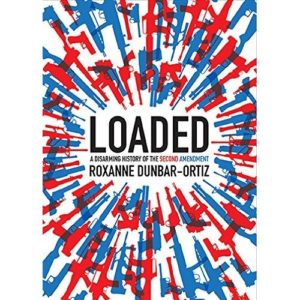 Join us for an afternoon with Roxanne Dunbar-Ortiz as she discusses Loaded, her provocative, timely, and deeply researched history of gun culture and how it reflects race and power in the United States.

America loves guns. From Daniel Boone and Jesse James, to the NRA and Seal Team 6, gun culture has colored the lore, shaped the law, and protected the market that arms the nation. In Loaded, Roxanne Dunbar-Ortiz peels away the myths of gun culture to expose the true historical origins of the Second Amendment, revealing the racial undercurrents connecting the earliest Anglo settlers with contemporary gun proliferation, modern-day policing, and the consolidation of influence of armed white nationalists.

From the enslavement of Blacks and the conquest of Native America, to the arsenal of institutions that constitute the “gun lobby,” Loaded presents a people’s history of the Second Amendment, as seen through the lens of those who have been most targeted by guns: people of color. Meticulously researched and thought-provoking throughout, this is essential reading for anyone interested in understanding the historical connections between racism and gun violence in the United States.

This event is free and open to the public. Copies of Loaded will be available for purchase.