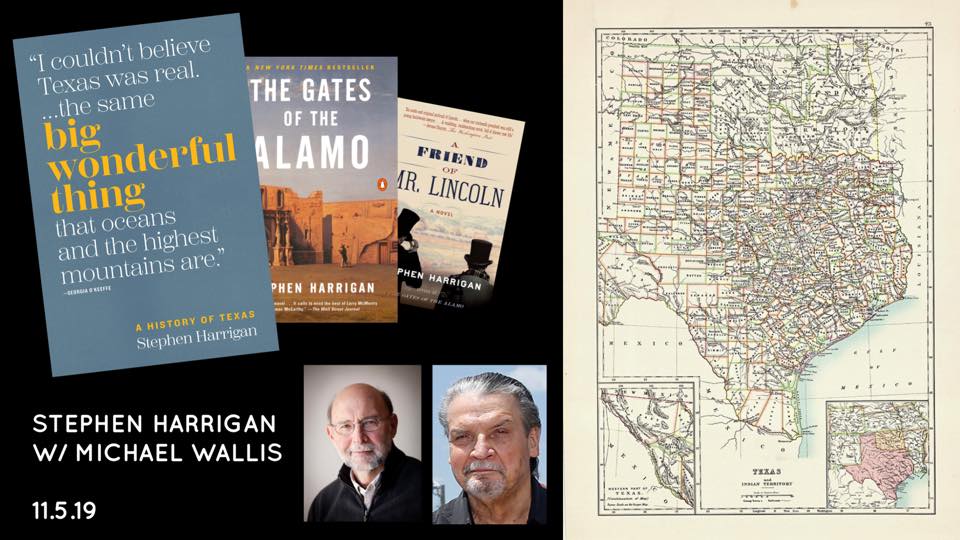 Acclaimed writer Stephen Harrigan joins us for his new history of Texas. In conversation with Michael Wallis.

“Big Wonderful Thing” invites us to walk in the footsteps of ancient as well as modern people along the path of Texas’s evolution. Blending action and atmosphere with impeccable research, New York Times best-selling author Stephen Harrigan brings to life with novelistic immediacy the generations of driven men and women who shaped Texas, including Spanish explorers, American filibusters, Comanche warriors, wildcatters, Tejano activists, and spellbinding artists—all of them taking their part in the creation of a place that became not just a nation, not just a state, but an indelible idea.

Written in fast-paced prose, rich with personal observation and a passionate sense of place, Big Wonderful Thing calls to mind the literary spirit of Robert Hughes writing about Australia or Shelby Foote about the Civil War. Like those volumes, it is a big book about a big subject, a book that dares to tell the whole glorious, gruesome, epically sprawling story of Texas.

“Stephen Harrigan has given us a wonderful new history of Texas. It tells us all we need to know and little that we don’t need to know. A splendid effort.” (Larry McMurtry)

” Big Wonderful Thing is history at its best—comprehensive, deeply informed, pleasurable, and filled with surprise and delight. It is at once a gift to the people of Texas and an unflinching explanation to the world at large of America’s most controversial state. The book itself is truly a big wonderful thing.” (Lawrence Wright)

“It’s rare to find a book that so compellingly weds such deep research with brilliant storytelling. A masterwork and a Texas history for the ages, destined to become a classic.” (Dan Rather)