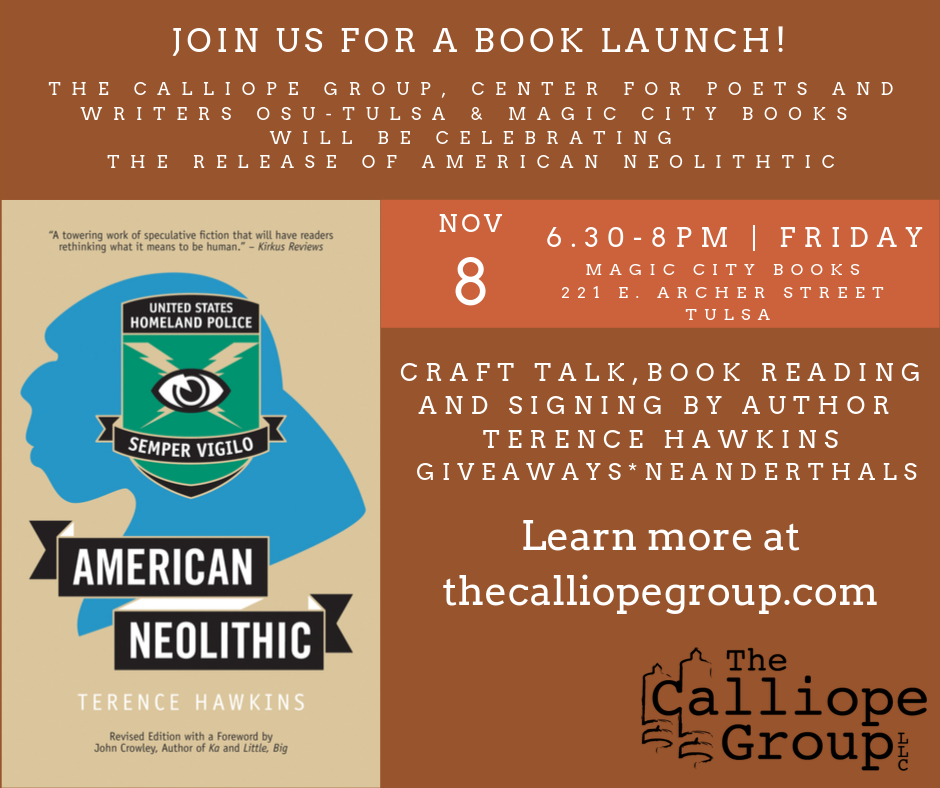 Magic City Books is proud to host the Tulsa launch event for Terence Hawkins and his new book, American Neolithic, the latest book from Tulsa publisher, The Calliope Group.

It’s the day after tomorrow.

America has become a Police State Lite. The Patriot Amendments have swallowed the Bill of Rights. Creationism trumps science. The Patriot Tribunal overrules the Supreme Court. And the drones of the Homeland Police are always watching.

Enter Blingbling. Brought to official attention by a hip-hop murder, he’s foreign-looking, undocumented, and apparently homeless. His hard-boiled lawyer, Raleigh, keeps the Homeland cops at arm’s length until a routine DNA test exposes a secret thousands of years old–one that threatens to destroy his client, his career, and much more.

Terence Hawkins was born in Uniontown PA, a onetime coal-mining hub featured in American Rust and Night of the Living Dead. He graduated from Yale and the University of Wisconsin Law School. In 2012, he became the founding director of the Yale Writers’ Conference, which he developed and managed through 2015. Since that time, he has served as the director of the Company of Writers. In 2018, he became the prose editor of Blue Mountain Review. His first novel, The Rage of Achilles, (Casperian, 2009) is an account of the Iliad informed by Julian Jaynes’s theory of the bicameral mind. Turing’s Graveyard, a collection of his short stories, will appear in 2020 from Running Wild Press.