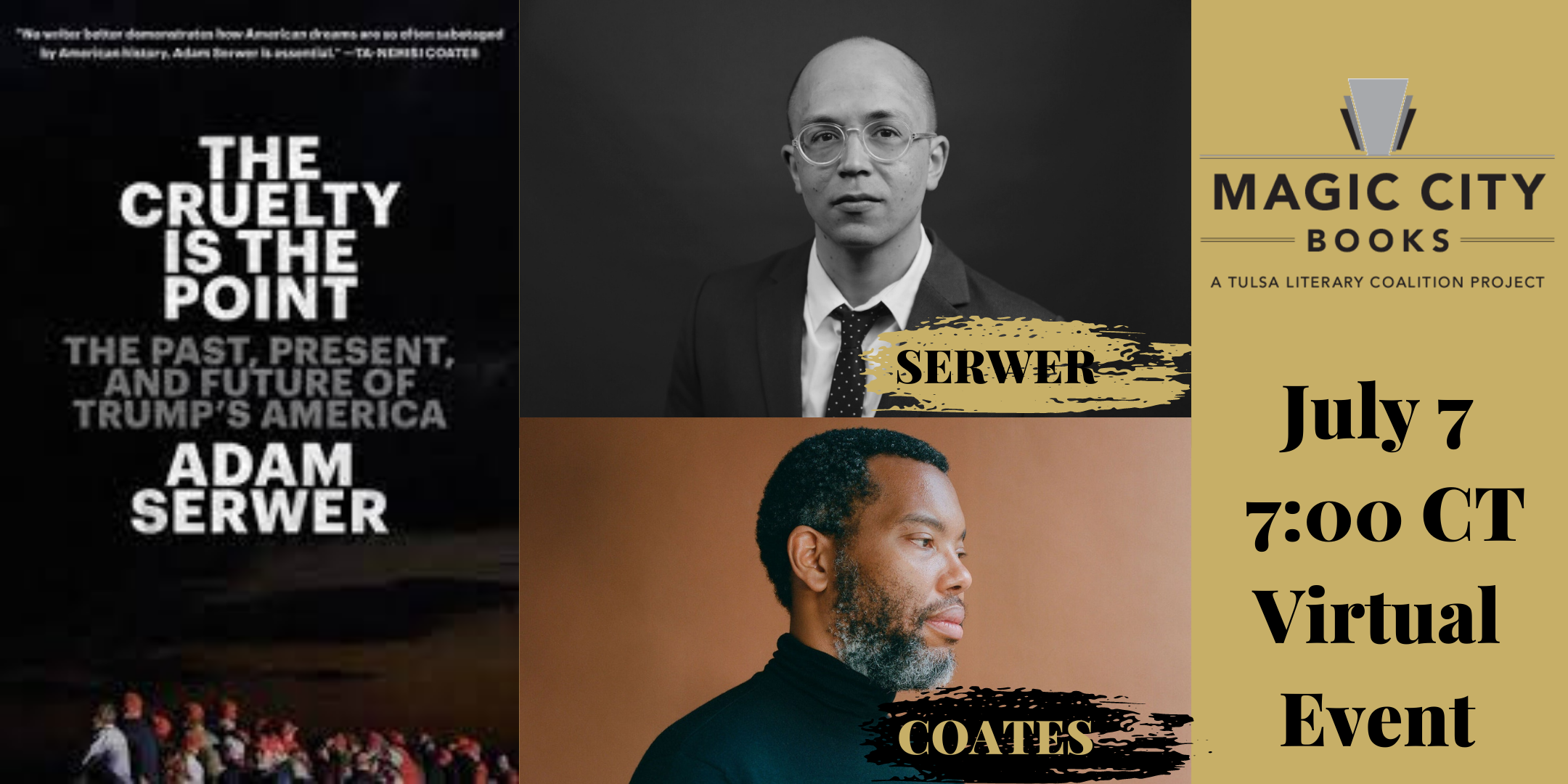 Magic City Books is proud to present an exclusive online conversation between Adam Serwer, author of the new book, The Cruelty is the Point, and Ta-Nehisi Coates.

This ticketed event includes one (1) copy of The Cruelty is the Point by Adam Serwer and one (1) link to the virtual event featuring Adam Serwer in conversation with Ta-Nehisi Coates on Wednesday July 7, 2021 at 7:00 pm CT.

The Cruelty is the Point is being released on June 29, shipping via USPS will begin that day and all tracking information will be sent from stamps.com. Please be understanding of potential shipping delays.

The link to the virtual event will be sent to the email address used to purchase your ticket on Tuesday, July 6. Be sure to double check your information at check out, please use an email that you regularly check and make sure that you enter your complete shipping address if having your book shipped.

About The Cruelty is the Point:

From an award-winning journalist at The Atlantic, these searing essays make a damning case that cruelty is not merely an unfortunate byproduct of the Trump administration but its main objective and the central theme of the American project.

“No writer better demonstrates how American dreams are so often sabotaged by American history. Adam Serwer is essential.”–Ta-Nehisi Coates

“Trump summoned the most treacherous forces in American history and conducted them with the ease of a grand maestro.”

Like many of us, Adam Serwer didn’t know that Donald Trump would win the 2016 election. But over the four years that followed, the Atlantic staff writer became one of our most astute analysts of the Trump presidency and the volatile powers it harnessed. The shock that greeted Trump’s victory, and the subsequent cruelty of his presidency, represented a failure to confront elements of the American past long thought vanquished.

In this searing collection, Serwer chronicles the Trump administration not as an aberration but as an outgrowth of the inequalities the United States was founded on. Serwer is less interested in the presidential spectacle than in the ideological and structural currents behind Trump’s rise–including a media that was often blindsided by the ugly realities of what the administration represented and how it came to be.

While deeply engaged with the moment, Serwer’s writing is also haunted by ghosts of an unresolved American past, a past that torments the present. In bracing new essays and previously published works, he explores white nationalism, myths about migration, the political power of police unions, and the many faces of anti-Semitism. For all the dynamics he examines, cruelty is the glue, the binding agent of a movement fueled by fear and exclusion. Serwer argues that rather than pretending these four years didn’t happen or dismissing them as a brief moment of madness, we must face what made them possible. Without acknowledging and confronting these toxic legacies, the fragile dream of American multiracial democracy will remain vulnerable to another ambitious demagogue.

Adam Serwer has written for The Atlantic since 2016, focusing on contemporary politics while often viewing it through the lens of history. Serwer was a Spring Fellow at the Shorenstein Center at the Kennedy School of Government at Harvard University as well as the Ira Lipman Fellow at the Columbia University School of Journalism. He is the recipient of the 2019 Hillman Prize for opinion journalism. He lives in San Antonio, Texas, with his family.

Ta-Nehisi Coates is the author of The Beautiful Struggle, We Were Eight Years in Power, and Between the World and Me, which won the National Book Award in 2015. He is the recipient of a MacArthur Fellowship. Coates lives in New York City with his wife and son.