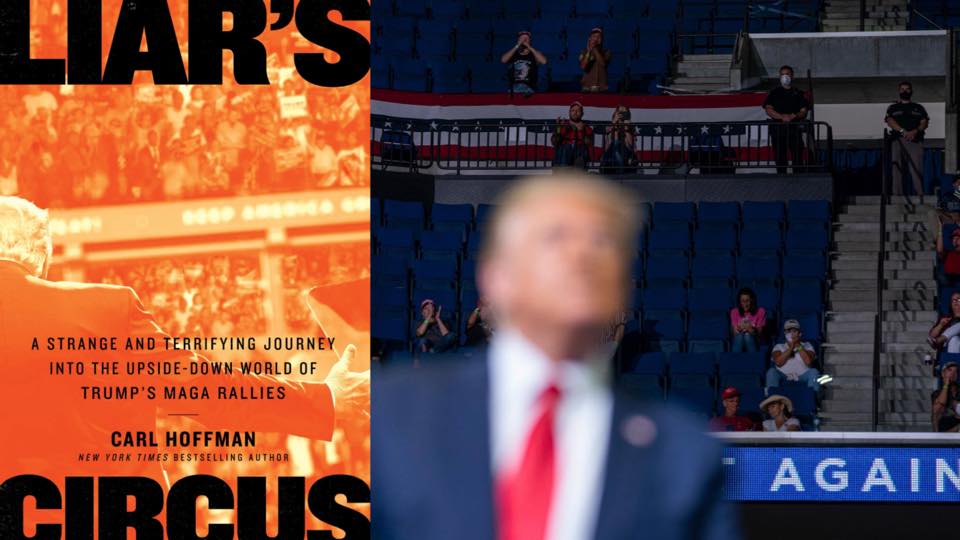 In Liar’s Circus, a work of daring and immersive contemporary anthropology, Hoffman, who has written about the most dangerous and remote corners of the world, journeys deep inside Donald Trump’s rallies seeking to understand the strange and powerful tribe that forms the president’s base.

This free event will be hosted on the Zoom platform. To register in advance visit: https://magiccitybooks.zoom.us/webinar/register/WN_VAseG9WmS6uXjlLmGQFPlg

After registering, you will receive an email confirmation about how to join the event on Thursday, September 16 at 7:00 CDT.

Carl Hoffman will be in conversation with Jeanne McCulloch, former managing editor of The Paris Review, senior editor of Tin House, and the founding Editorial Director of Tin House Books. Jeanne’s memoir, All Happy Families was published in 2018.

Liar’s Circus is available at Magic City Books now. You can purchase a copy in the store, call to have it shipped (918-602-4452) or purchase online here: https://magiccitybooks.square.site/product/liar-s-circus/200

All Happy Families by Jeanne McCulloch is also available at Magic City Books or you can purchase online here: https://magiccitybooks.square.site/product/all-happy-families/201

Liar’s Circus proceeds from the premise that Donald J. Trump’s rallies are a singular and defining force—a kind of Rosetta stone to understanding the Age of Trump. Yet while much remarked upon, the rallies are, in fact, little examined, with the focus almost always on Trump’s latest outrageous statement. But who are the tens of thousands of people who fill America’s stadiums and arenas? What do they see in Trump? And what curious alchemy—between president and adoring crowd—happens there that might explain Trump’s rise?

To date, no reporter has sought to understand the rallies as a sociological phenomenon examined from the bottom up. Hoffman has done just this. He has stood in line for more than 170 hours with Trump’s most ardent superfans and joined them at the very front row; he has traveled from Minnesota to Texas, Louisiana, Mississippi, and New Hampshire immersing himself in their culture.

Carl Hoffman is the author of the New York Times bestseller Savage Harvest, hailed as a “masterpiece” by Outside and named a New York Times editors’ choice and one of the Washington Post‘s 50 notable works of nonfiction for 2014, as well as The Lunatic Express. He is a former contributing editor to National Geographic Traveler and Wired, and has traveled on assignment to eighty countries.