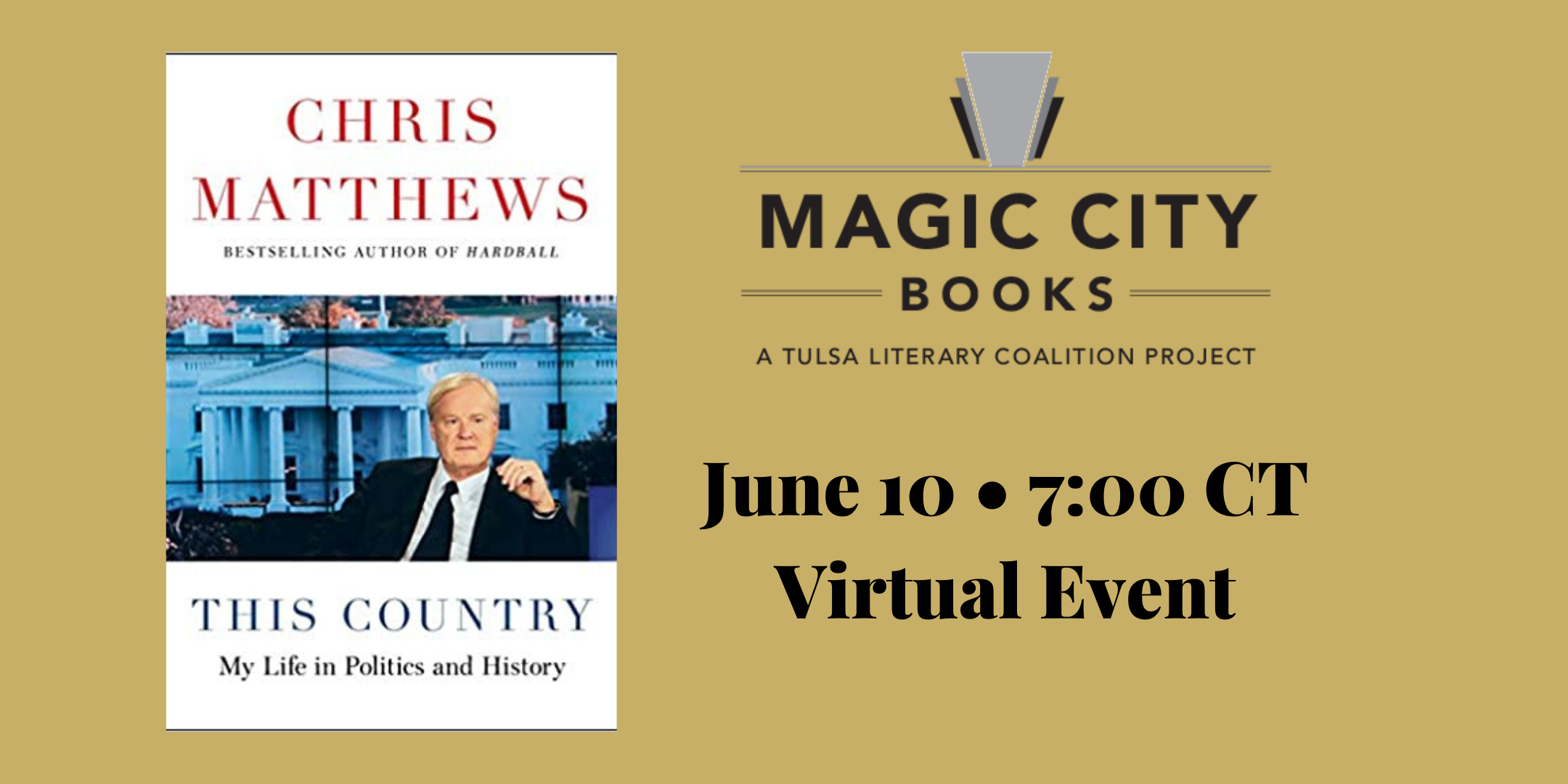 Magic City Books is proud to welcome Chris Matthews for a virtual author program in celebration of his new book, This Country: My Life in Politics and History on Thursday June 10, 2021 at 7:00 pm CDT. This ticketed event includes one (1) copy of This Country by Chris Matthews and one (1) link to the virtual event on June 10.

This Country is being released on June 1, shipping via USPS will begin that day and all tracking information will be sent from stamps.com. Please be understanding of potential shipping delays.

The link to the virtual event will be sent to the email address used to purchase your ticket on Wednesday, June 9. Be sure to double check your information at check out, please use an email that you regularly check and make sure that you enter your complete shipping address if having your book shipped.

In This Country, Chris Matthews offers a panoramic portrait of post-World War II America through the story of his remarkable life and career. It is a story of risk and adventure, of self-reliance and service, of loyalty and friendship. It is a story driven by an abiding faith in our country.

Raised in a large Irish-Catholic family in Philadelphia at a time when kids hid under their desks in atomic war drills, Chris’s life etched a pattern: take a leap, live an adventure, then learn what it means. As a young Peace Corps graduate, Chris moved to DC and began knocking on doors on Capitol Hill. With dreams of becoming what Ted Sorensen had been for Jack Kennedy, Chris landed as a staffer to Utah Senator Frank Moss, where his eyes were opened to the game of big-league politics.

In the 1970s, Matthews mounted a campaign for Congress as a Democratic maverick running against Philadelphia’s old political machine. He didn’t win the most votes, but his grit put him on the path to a top job in the White House. As a speechwriter for President Carter, Matthews witnessed the triumphs and tragedies of that administration; from the diplomatic brilliance of the Israeli-Egyptian peace treaty to the disaster of the Iran hostage crisis. After Carter’s defeat, Chris became chief of staff to legendary Speaker of the House Tip O’Neill, a perch that gave him an on-the-job PhD in American politics during the Reagan years.

Chris then leapt to the other side of the political matrix as a columnist and reporter. For the San Francisco Examiner, he covered the fall of the Berlin Wall, the first all-races election in South Africa, the Good Friday Agreement in Northern Ireland, and every American presidency from Reagan to George W. Bush. Chris would go on to pioneer cable news with a fast-paced, no-nonsense television program. His show, Hardball with Chris Matthews, would become a political institution for twenty years.

As Chris charts his political odyssey, he paints an energetic picture of a nation searching for its soul. He reflects with grace and wisdom, showcasing the grand arc of the American story through one life dedicated to its politics.

Chris Matthews is a visiting professor at Fulbright University, Vietnam. He is the author of the New York Times bestsellers Bobby Kennedy: A Raging Spirit; Jack Kennedy: Elusive Hero; Tip and the Gipper: When Politics Worked; Kennedy & Nixon; and Hardball. For twenty years he anchored Hardball with Chris Matthews on MSNBC.