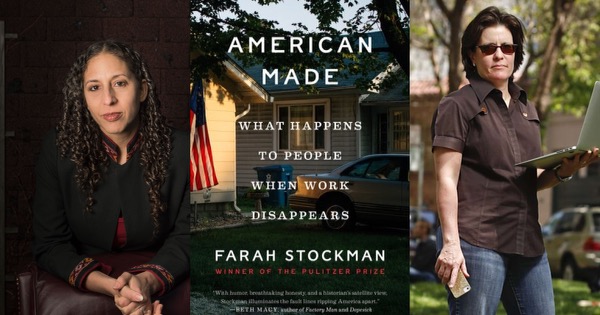 Magic City Books is proud to welcome Pulitzer Prize winning journalist, Farah Stockman for a free virtual event in celebration of her new book, American Made: What Happens to People When Work Disappears.

American Made gives readers an up-close look at the profound role work plays in our sense of identity and belonging, as she follows three workers whose lives unravel when the factory they have dedicated so much to closes down.

Farah will be joined in conversation by journalist Kara Swisher, an opinion writer for The New York Times and host of the podcast Sway.

This free virtual event will be hosted on the Zoom platform and Facebook Live. To register in advance for the event on Zoom, visit: https://magiccitybooks.zoom.us/webinar/register/WN_IOeX5aewR9iDpZYu6edlGw.

After registering you will receive a confirmation email with details on how to join the event on Wednesday, October 13 at 7:00 pm CT.

American Made will be published by Random House on October 12, 2021. To pre-order a copy you can visit Magic City Books in person or shop online, https://magiccitybooks.square.site/product/american-made/584.

What happens when Americans lose their jobs? In this illuminating story of ruin and reinvention, Pulitzer Prize-winning journalist Farah Stockman gives an up-close look at the profound role work plays in our sense of identity and belonging, as she follows three workers whose lives unravel when the factory they have dedicated so much to closes down.

Shannon, Wally, and John built their lives around their place of work. Shannon, a white single mother, became the first woman to run the dangerous furnaces at the Rexnord manufacturing plant in Indianapolis, Indiana, and was proud of producing one of the world’s top brands of steel bearings. Wally, a black man known for his initiative and kindness, was promoted to chairman of efficiency, one of the most coveted posts on the factory floor, and dreamed of starting his own barbecue business one day. John, a white machine operator, came from a multigenerational union family and clashed with a work environment that was increasingly hostile to organized labor. The Rexnord factory had served as one of the economic engines for the surrounding community. When it closed, hundreds of people lost their jobs. What had life been like for Shannon, Wally, and John, before the plant shut down? And what became of them after the jobs moved to Mexico and Texas?

American Made is the story of a community struggling to reinvent itself. It is also a story about race, class, and American values, and how jobs serve as a bedrock of people’s lives and drive powerful social justice movements. This revealing book shines a light on this political moment, when joblessness and uncertainty about the future of work have made themselves heard at a national level. Most of all, it is a story about people: who we consider to be one of us and how the dignity of work lies at the heart of who we are.

Farah Stockman joined the New York Times editorial board in 2020 after covering politics, social movements, and race for the national desk. She previously spent sixteen years at the Boston Globe, nearly half of that time as the paper’s foreign policy reporter in Washington, D.C. She has reported from Afghanistan, Pakistan, Iran, South Sudan, Rwanda, and Guantánamo Bay. She also served as a columnist and an editorial board member at the Globe. In 2016, she won the Pulitzer Prize for a series of columns about the efforts to desegregate Boston’s schools. She lives in Cambridge, Massachusetts, but also spends time in Michigan.