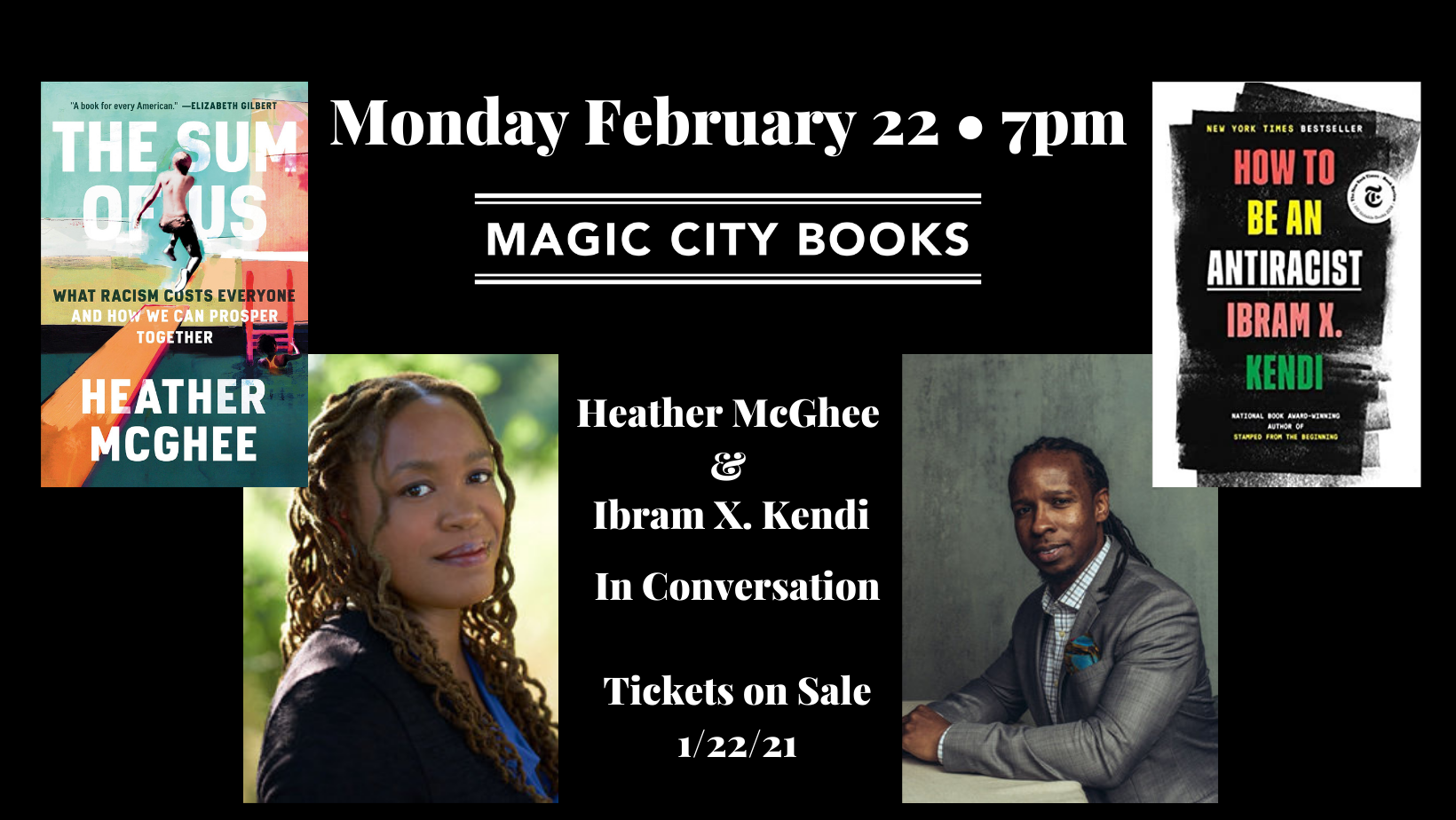 Magic City Books is proud to welcome Heather McGhee, former president of the inequality-focused think tank Demos and current board chairperson of Color of Change, the nation’s largest online racial justice organization, for a virtual author event in celebration of her new book, The Sum of Us: What Racism Costs Everyone and How We Can Prosper Together.

Joining Heather McGhee in conversation about her book we will welcome Dr. Ibram X. Kendi, author of many books including Stamped from the Beginning and How to Be an Antiracist.

Each ticket includes one (1) hardcover copy of The Sum of Us by Heather McGhee and one (1) link to the virtual event on Monday, February 22 at 7:00 pm CST.

Ticket purchasers have the option to have their book shipped to them or to pick up their book at Magic City Books starting on Tuesday, February 16.

About The Sum of Us:

One of today’s most insightful and influential thinkers offers a powerful exploration of inequality and the lesson that generations of Americans have failed to learn: Racism has a cost for everyone–not just for people of color.

“This is the book I’ve been waiting for.”–Ibram X. Kendi, #1 New York Times bestselling author of How to Be an Antiracist

Heather McGhee’s specialty is the American economy–and the mystery of why it so often fails the American public. From the financial crisis to rising student debt to collapsing public infrastructure, she found a common root problem: racism. But not just in the most obvious indignities for people of color. Racism has costs for white people, too. It is the common denominator of our most vexing public problems, the core dysfunction of our democracy and constitutive of the spiritual and moral crises that grip us all. But how did this happen? And is there a way out?

McGhee embarks on a deeply personal journey across the country from Mississippi to California to Maine, tallying what we lose when we buy into the zero-sum paradigm–the idea that progress for some of us must come at the expense of others. Along the way, she meets white people who confide in her about losing their homes, their dreams, and their shot at better jobs to the toxic mix of American racism and greed. This is the story of how public goods in this country–from parks and pools to functioning schools–have become private luxuries; of how unions collapsed, wages stagnated, and inequality increased; and of how this country, unique among the world’s advanced economies, has thwarted universal healthcare.

But in unlikely places of worship and work, McGhee finds proof of what she calls the Solidarity Dividend: gains that come when people come together across race, to accomplish what we simply can’t do on our own.

The Sum of Us is a brilliant analysis of how we arrived here: divided and self-destructing, materially rich but spiritually starved and vastly unequal. McGhee marshals economic and sociological research to paint an irrefutable story of racism’s costs, but at the heart of the book are the humble stories of people yearning to be part of a better America, including white supremacy’s collateral victims: white people themselves. With startling empathy, this heartfelt message from a Black woman to a multiracial America leaves us with a new vision for a future in which we finally realize that life can be more than zero-sum.

Heather McGhee is an expert in economic and social policy. The former president of the inequality-focused think tank Demos, McGhee has drafted legislation, testified before Congress and contributed regularly to news shows including NBC’s Meet the Press. She now chairs the board of Color of Change, the nation’s largest online racial justice organization. McGhee holds a BA in American studies from Yale University and a JD from the University of California at Berkeley School of Law.

Ibram X. Kendi is the Andrew W. Mellon Professor in the Humanities at Boston University and the founding director of the BU Center for Antiracist Research. He is a contributing writer at The Atlantic and a CBS News correspondent. He is the author of many books including Stamped from the Beginning: The Definitive History of Racist Ideas in America, which won the National Book Award for Nonfiction, and three #1 New York Times bestsellers, How to Be an Antiracist; Stamped: Racism, Antiracism, and You, co-authored with Jason Reynolds; and Antiracist Baby, illustrated by Ashley Lukashevsky. In 2020, Time magazine named him one of the 100 most influential people in the world.