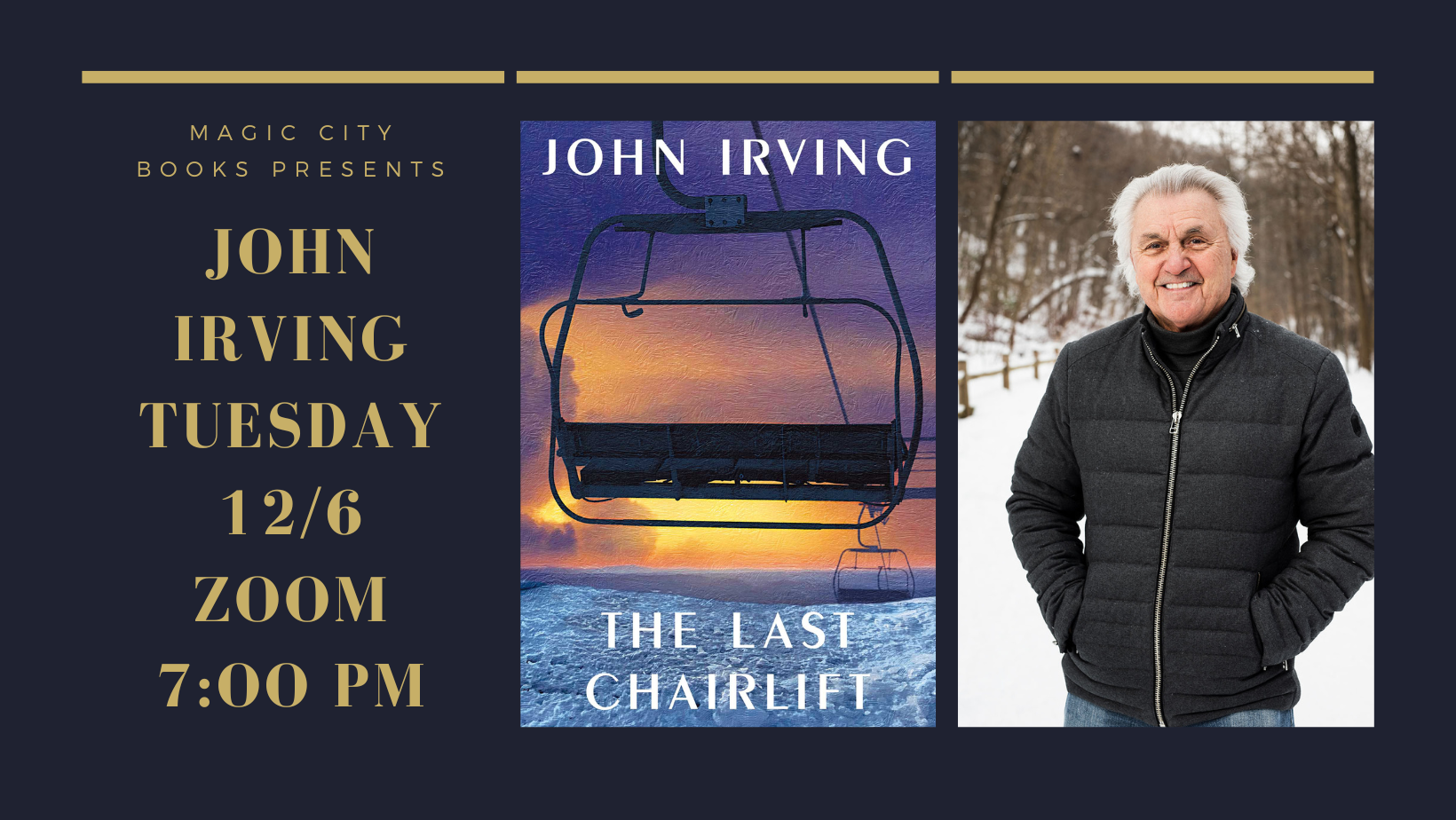 Magic City Books is thrilled to welcome John Irving, one of the world’s greatest novelists, for an exclusive virtual event to celebrate the 5th anniversary of Magic City Books and Irving’s latest novel, The Last Chairlift, his first novel in seven years–a ghost story, a love story, and a lifetime of sexual politics.

John Irving has written some of the most acclaimed books of our time–among them, The World According to Garp and The Cider House Rules. A visionary voice on the subject of sexual tolerance, Irving is a bard of alternative families. In The Last Chairlift, readers will once more be in his thrall.

John Irving will be joined in conversation by Magic City Books co-founder and president, Jeff Martin.

This virtual event will be hosted on the Zoom platform on Tuesday December 6 at 7:00 pm CT. Each ticket includes one (1) copy of The Last Chairlift by John Irving and one (1) link to the virtual event.

Customers can choose to pick up their copy of The Last Chairlift in the store or have it shipped to you. Shipping via USPS will begin the week of December 5 and all tracking information will be sent from stamps.com. Please be understanding of potential shipping delays due to the heavy volume of holiday packages.

The link to the virtual event will be sent to the email address used to purchase your ticket. Be sure to double check your information at check out, please use an email that you regularly check and make sure that you enter your complete shipping address if having your book shipped.

If you exceed or attempt to exceed the posted ticket limits, we reserve the right to cancel, without notice, any or all orders and tickets, in addition to prohibiting your ticket purchasing abilities. Any tickets canceled due to violating the posted ticket limit may be refunded at face value (excluding fees). This includes orders associated with the same name, e-mail address, billing address, credit card number, or other information.

About The Last Chairlift

In Aspen, Colorado, in 1941, Rachel Brewster is a slalom skier at the National Downhill and Slalom Championships. Little Ray, as she is called, finishes nowhere near the podium, but she manages to get pregnant. Back home, in New England, Little Ray becomes a ski instructor.

Her son, Adam, grows up in a family that defies conventions and evades questions concerning the eventful past. Years later, looking for answers, Adam will go to Aspen. In the Hotel Jerome, where he was conceived, Adam will meet some ghosts; in The Last Chairlift, they aren’t the first or the last ghosts he sees.

John Irving was born in Exeter, New Hampshire, in 1942. His first novel, Setting Free the Bears, was published in 1968, when he was twenty-six. He competed as a wrestler for twenty years, and coached wrestling until he was forty-seven. He is a member of the National Wrestling Hall of Fame in Stillwater, Oklahoma. In 1980, Mr. Irving won a National Book Award for his novel The World According to Garp. In 2000, he won the Oscar for Best Adapted Screenplay for The Cider House Rules. In 2013, he won a Lambda Literary Award for his novel In One Person.

An international writer, his novels have been translated into almost forty languages. His all-time bestselling novel, in every language, is A Prayer for Owen Meany. A dual citizen of the United States and Canada, John Irving lives in Toronto.