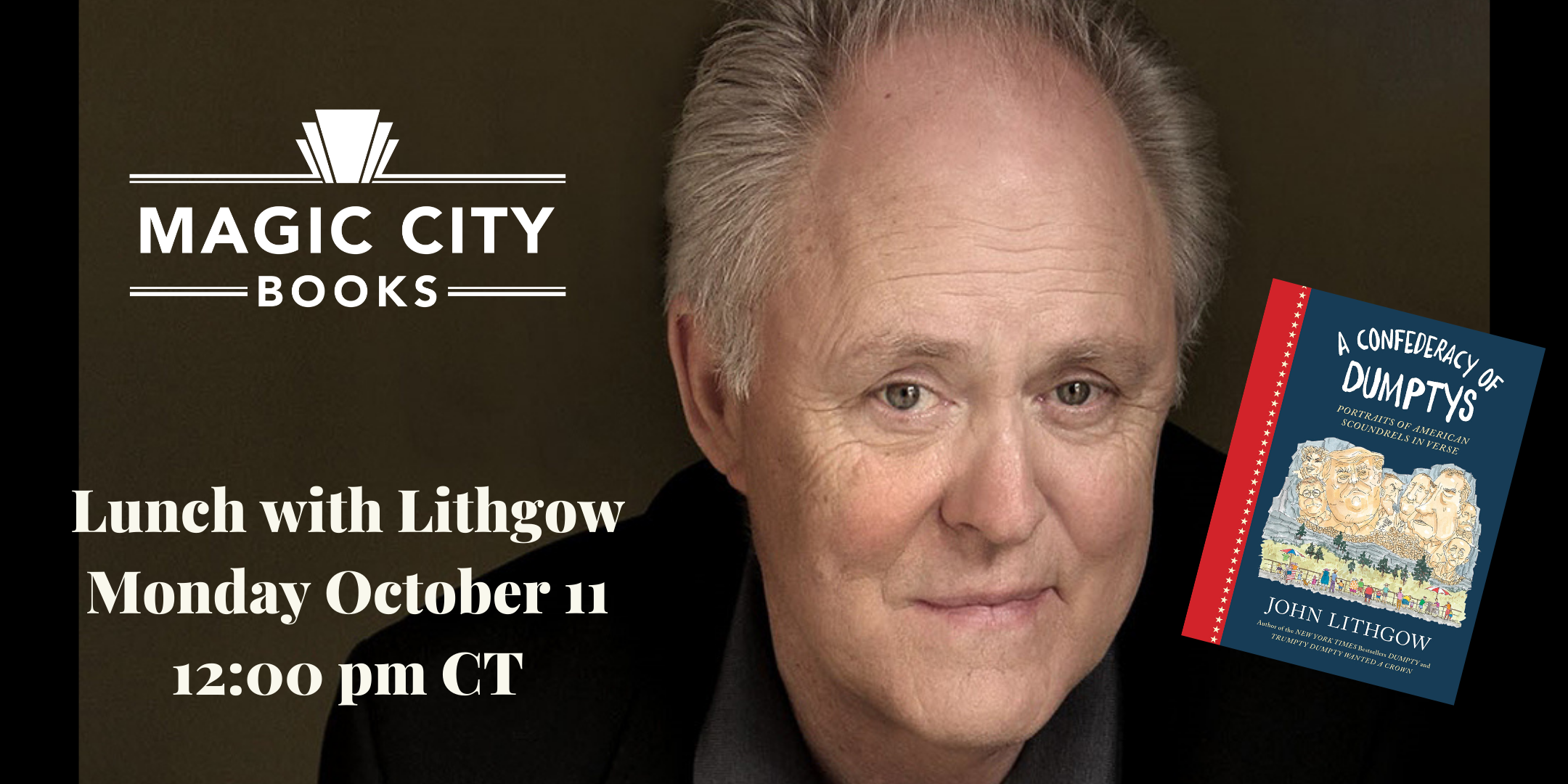 Magic City Books is proud to present an exclusive “lunchtime” event with acclaimed actor and author, John Lithgow to celebrate his latest book, A Confederacy of Dumptys: Portraits of American Scoundrels in Verse.

Following the success of New York Times bestsellers Dumpty and Trumpty Dumpty Wanted a Crown, award-winning actor, author, and illustrator John Lithgow presents the third book in his runaway hit series. A Confederacy of Dumptys takes us through a history of twenty-five American Scoundrels in this all-new collection of Lithgow’s satirical poems and illustrations.

This special event will be hosted on the Zoom platform at 12:00 pm CT on Monday October 11, 2021. All tickets for the event include one (1) copy of A Confederacy of Dumptys by John Lithgow and one (1) link to the virtual event on Monday, October 11.

A Confederacy of Dumptys is being published on October 5, shipping via USPS will begin that day and all tracking information will be sent from stamps.com. Please be understanding of potential shipping delays.

The link to the virtual event will be sent to the email address used to purchase your ticket on Friday, October 8. Be sure to double check your information at check out, please use an email that you regularly check and make sure that you enter your complete shipping address if having your book shipped.

Dumpty and Trumpty Dumpty Wanted a Crown are both available for purchase at Magic City Books or you can shop online.

About A Confederacy of Dumptys:

Following the success of New York Times bestsellers Dumpty and Trumpty Dumpty Wanted a Crown, award-winning actor, author, and illustrator John Lithgow presents the third book in his runaway hit series. A Confederacy of Dumptys takes us through a history of twenty-five American Scoundrels in this all-new collection of Lithgow’s satirical poems and illustrations.

While the Trump Era was rife with corruption and abuse of power, it was nothing new. Through Lithgow’s cutting humor, you will read about a rogues’ gallery of villains that came before Donald J. Trump, powerful men and women who were corrupt, venal, criminal, adulterous, racist, or just plain disgusting. With dark and lyrical stories from across American history, you will learn about long-forgotten figures and bad actors of today, including the first Grand Wizard of the Ku Klux Klan, the perpetrator of 19th century women’s pyramid schemes, and participants in both the Watergate scandal and the Capitol insurrection. Trump and Nixon show up, of course, but also Leona Helmsley, Boss Tweed, Typhoid Mary, Newt Gingrich, Ted Cruz, and many more. Skipping through time, and delivered with classic Lithgow wit and style, A Confederacy of Dumptys is an exuberant reminder of how not to repeat history.

JOHN LITHGOW is an actor with two Tonys, six Emmys, two Golden Globes, and two Oscar nominations. He has starred in the hit TV series 3rd Rock from the Sun, Dexter, The Crown, and Perry Mason, and in critically acclaimed films such as The World According to Garp, Terms of Endearment, and Bombshell. Lithgow has performed on Broadway 25 times and in England with both the Royal Shakespeare Company and the National Theatre. In addition to the New York Times bestsellers Dumpty and Trumpty Dumpty Wanted a Crown, he has written nine children’s picture books, and his recordings for kids have landed him four Grammy nominations.