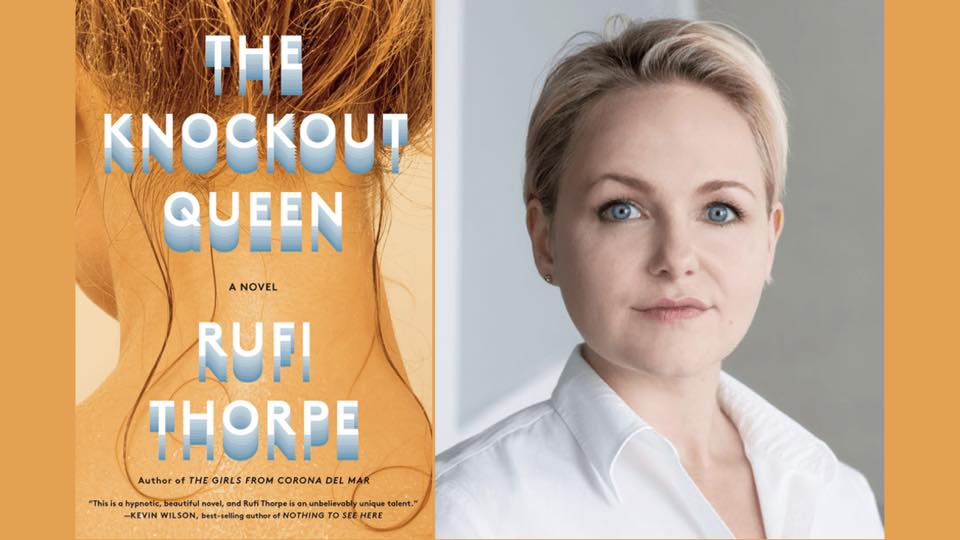 Join a conversation with Rufi Thorpe, author of one of the year’s most anticipated novels.

About The Knockout Queen

A dazzling and darkly comic novel of love, violence, and friendship in the California suburbs

Bunny Lampert is the princess of North Shore⁠—beautiful, tall, blond, with a rich real-estate-developer father and a swimming pool in her backyard. Michael⁠⁠—with a ponytail down his back and a septum piercing⁠—lives with his aunt in the cramped stucco cottage next door. When Bunny catches Michael smoking in her yard, he discovers that her life is not as perfect as it seems. At six foot three, Bunny towers over their classmates. Even as she dreams of standing out and competing in the Olympics, she is desperate to fit in, to seem normal, and to get a boyfriend, all while hiding her father’s escalating alcoholism. Michael has secrets of his own. At home and at school Michael pretends to be straight, but at night he tries to understand himself by meeting men online for anonymous encounters that both thrill and scare him. When Michael falls in love for the first time, a vicious strain of gossip circulates and a terrible, brutal act becomes the defining feature of both his and Bunny’s futures⁠⁠—and of their friendship. With storytelling as intoxicating as it is intelligent, Rufi Thorpe has created a tragic and unflinching portrait of identity, a fascinating examination of our struggles to exist in our bodies, and an excruciatingly beautiful story of two humans aching for connection.

Register in advance for the virtual event: https://magiccitybooks.zoom.us/meeting/register/tJEvd–rpzkuGNzljZLNF7-tFh_GvfYZ7anC

After registering, you will receive a confirmation email containing information about joining the meeting.

Copies of The Knockout Queen by Rufi Thorpe are available for purchase through Magic City Books: https://magiccitybooks.square.site/product/the-knockout-queen/103?cs=true