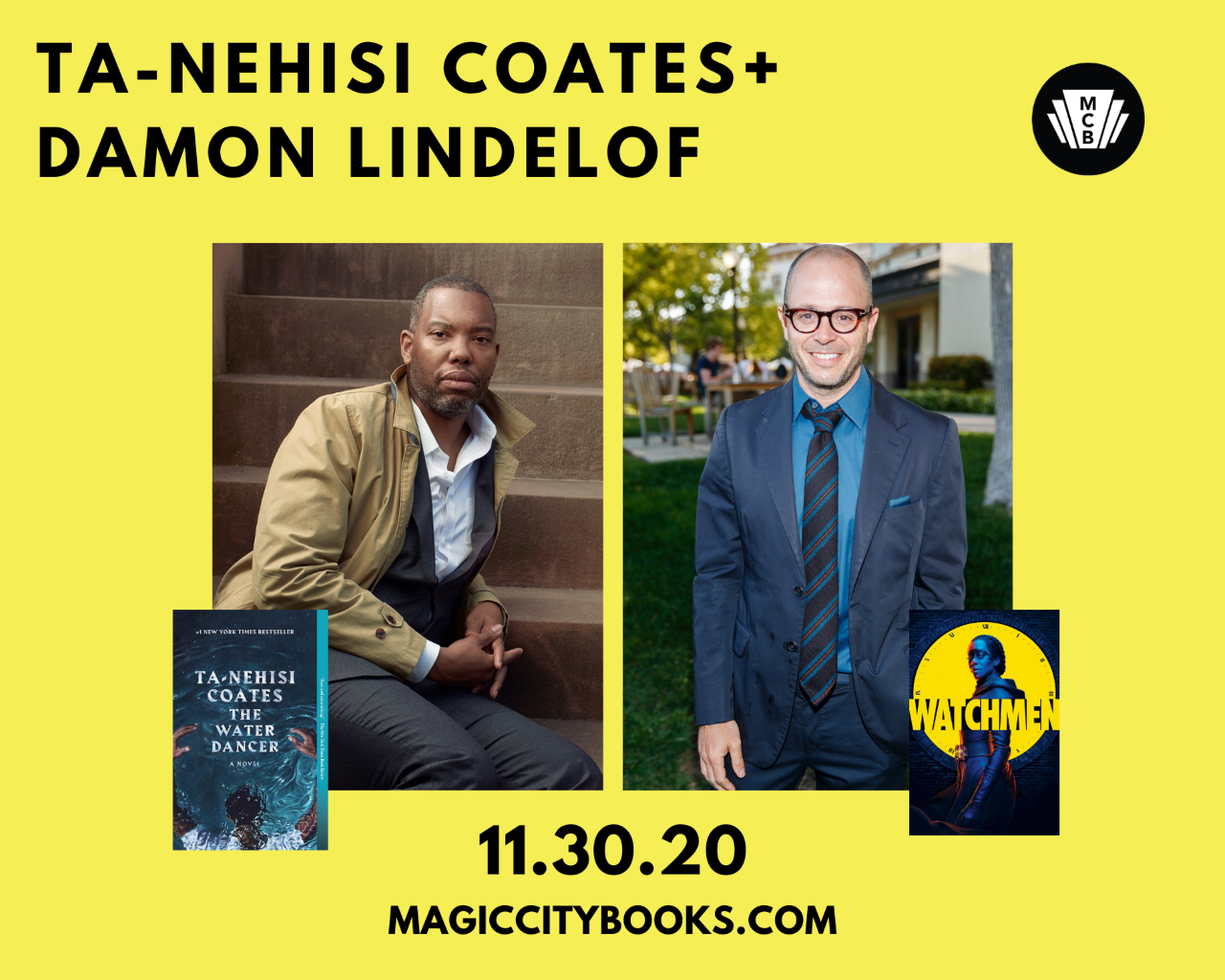 Magic City Books is proud to present an exclusive event featuring Ta-Nehisi Coates in conversation with Damon Lindelof celebrating the paperback release of The Water Dancer.
Each ticket includes one (1) paperback copy of The Water Dancer and one (1) link to the video event on Monday, November 30 at 7:00 pm CT. Ticket holders may choose to pick up their book in store, or have their book shipped for an additional charge. (Sorry, no international shipping)

About The Water Dancer:

Young Hiram Walker was born into bondage. When his mother was sold away, Hiram was robbed of all memory of her–but was gifted with a mysterious power. Years later, when Hiram almost drowns in a river, that same power saves his life. This brush with death births an urgency in Hiram and a daring scheme: to escape from the only home he’s ever known. So begins an unexpected journey that takes Hiram from the corrupt grandeur of Virginia’s proud plantations to desperate guerrilla cells in the wilderness, from the coffin of the Deep South to dangerously idealistic movements in the North. Even as he’s enlisted in the underground war between slavers and the enslaved, Hiram’s resolve to rescue the family he left behind endures. The Water Dancer is a propulsive, transcendent work that restores the humanity of those from whom everything was stolen.

TA-NEHISI COATES is a distinguished writer in residence at NYU’s Arthur L. Carter Journalism Institute. He is the author of the bestselling books The Beautiful Struggle, We Were Eight Years in Power, and Between The World And Me, which won the National Book Award in 2015. His first novel, The Water Dancer, was released in paperback in November 2020. Ta-Nehisi is a recipient of a MacArthur Fellowship. He is also the current author of the Marvel comics The Black Panther and Captain America.

DAMON LINDELOF was born in New Jersey to a schoolteacher and a banker.  He was also born a writer, although it would take over 25 years to figure that out.  In 2004 he partnered with J.J. Abrams to create LOST.  No, they were not dead the whole time. Since Damon left the island, he has worked as a writer and producer on STAR TREK, PROMETHEUS, WORLD WAR Z, TOMORROWLAND and most recently THE HUNT. Returning to TV in 2014 Damon spent three seasons showrunning HBO’s critically-acclaimed THE LEFTOVERS, which he fiercely defends as “not as depressing as everyone says.”  Most recently he just wrapped up the HBO series WATCHMEN, which he fiercely defends as “not as confusing as everyone says.”  Damon also wrote this bio.