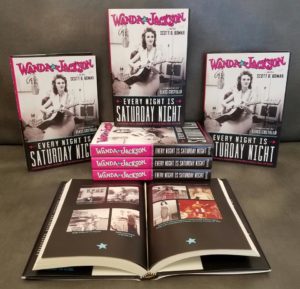 Online ticket sales are closed. You may purchase a ticket at the event.

Join us for a very special conversation and book signing with music legend, Wanda Jackson! Tickets go live December 21 at 10am on magiccitybooks.com.

In “Every Night is Saturday Night”, Wanda tells her own story of getting discovered by Country Music Hall of Famer Hank Thompson; shy she refused to return to The Grand Ole Opry for more than fifty years; the challenges she and her integrated band, The Party Timers, faced in the early 1960s; finding the love of her life; her recent work with rock luminaries Jack White and Joan Jett; and how her deep faith has sustained her over more than seven decades of rocking, shocking, and thrilling audiences around the globe.

“I love her. She’s so brilliant. I don’t think Rollin’ in the Deep would exist if it wasn’t for Wanda Jackson.” — Adele

“Look around today and you can hear lots of rocking girl singers who owe an unconscious debt to the mere idea of a woman like Wanda. She was standing up on stage with a guitar in her hands and making a sound that was as wild and raw as any rocker, man or woman, while other gals were still asking, ‘How much is that doggy in the window?'” — Elvis Costello

“She’s influential to every modern female singer, whether they know about her or not. She broke down those walls in the beginning, when it was the hardest to do.” — Jack White

“There’s an authenticity in her voice that conjures up a world and a very distinct and particular place in time.” — Bruce Springsteen

“As you look up the history of your roots in music, you don’t find a lot of women. But Wanda Jackson was right there, at the beginning of it….“I learned to sing rock ’n’ roll by listening to Wanda Jackson, but I learned about country music from her, too.” — Cyndi Lauper

“Wanda Jackson, an atomic fireball of a lady, could have a smash hit with just about anything.” — Bob Dylan