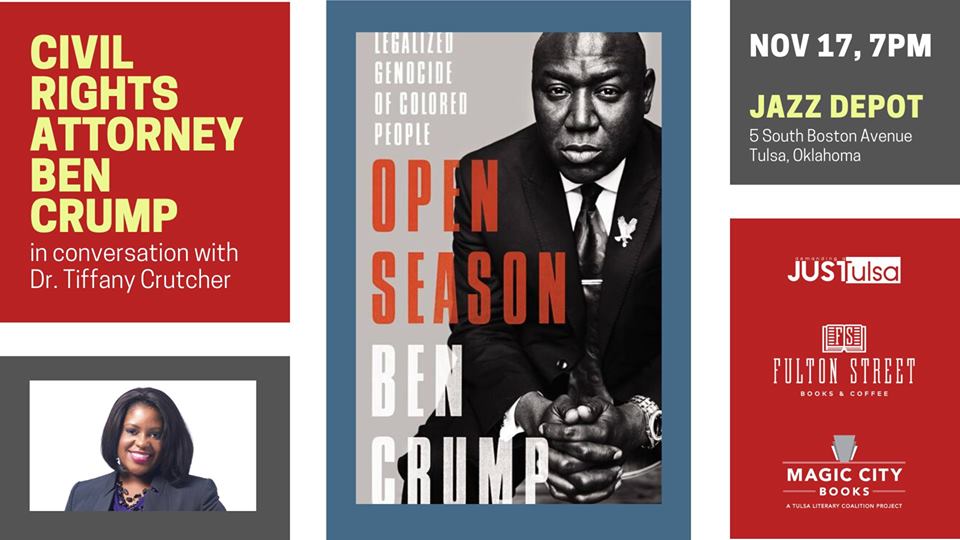 Join us for an evening with civil rights attorney Ben Crump, in conversation with Dr. Tiffany Crutcher, to discuss his new book Open Season: Legalized Genocide of Colored People.

ABOUT THE BOOK
From one of the most distinguished civil rights attorneys working today, “Open Season” details his life mission to preserve the hard-won justice for all.

A strong believer in fighting for justice for all, Ben Crump has devoted his career to being an advocate for the marginalized, insisting that civil rights covers all Americans, not just those privileged by race, wealth, or pedigree. “Open Season” is one lawyer’s personal journey working on some of the most egregious civil rights cases, including widely publicized cases like that of twelve-year-old Tamir Rice, Trayvon Martin, and Michael Brown.

The product of decades of first-hand experience working in the justice system, “Open Season” reveals the so often hidden injustices that minority groups face and provides the full context for comprehending just how discrimination in the courthouse affects real families and communities.

Through the various cases that Crump has represented, he shows how it is legal to harm (with the intent to destroy) people of color. He examines the 13th Amendment of the constitution, which abolished slavery and involuntary servitude-except as punishment for a crime. He explores legislative intent, meaning the ways in which crimes are defined. He addresses “The 1951 We Charge Genocide Petition to the United Nations.” He compares the sentences of those convicted for Black on Black crimes, Black on White crimes, and White on White crimes. He investigates police unions and reveals their roles in protecting police who shoot unarmed civilians. He questions the Stand Your Ground laws. And he exposes budget cuts for education, proliferation of guns in minority communities, and high unemployment rates-which all directly contribute to higher crime rates.

Despite witnessing, case after case, the many civil rights violations committed against blacks, Crump maintains a refreshing belief in the legal system and due process. A masterful book and a call to action, “Open Season” challenges American to live up to its promise to its citizens, to defend the rights of its citizens equally.

This event is free and open to the public. Sponsored by Demanding a JUSTulsa, Fulton Street, and Magic City Books.