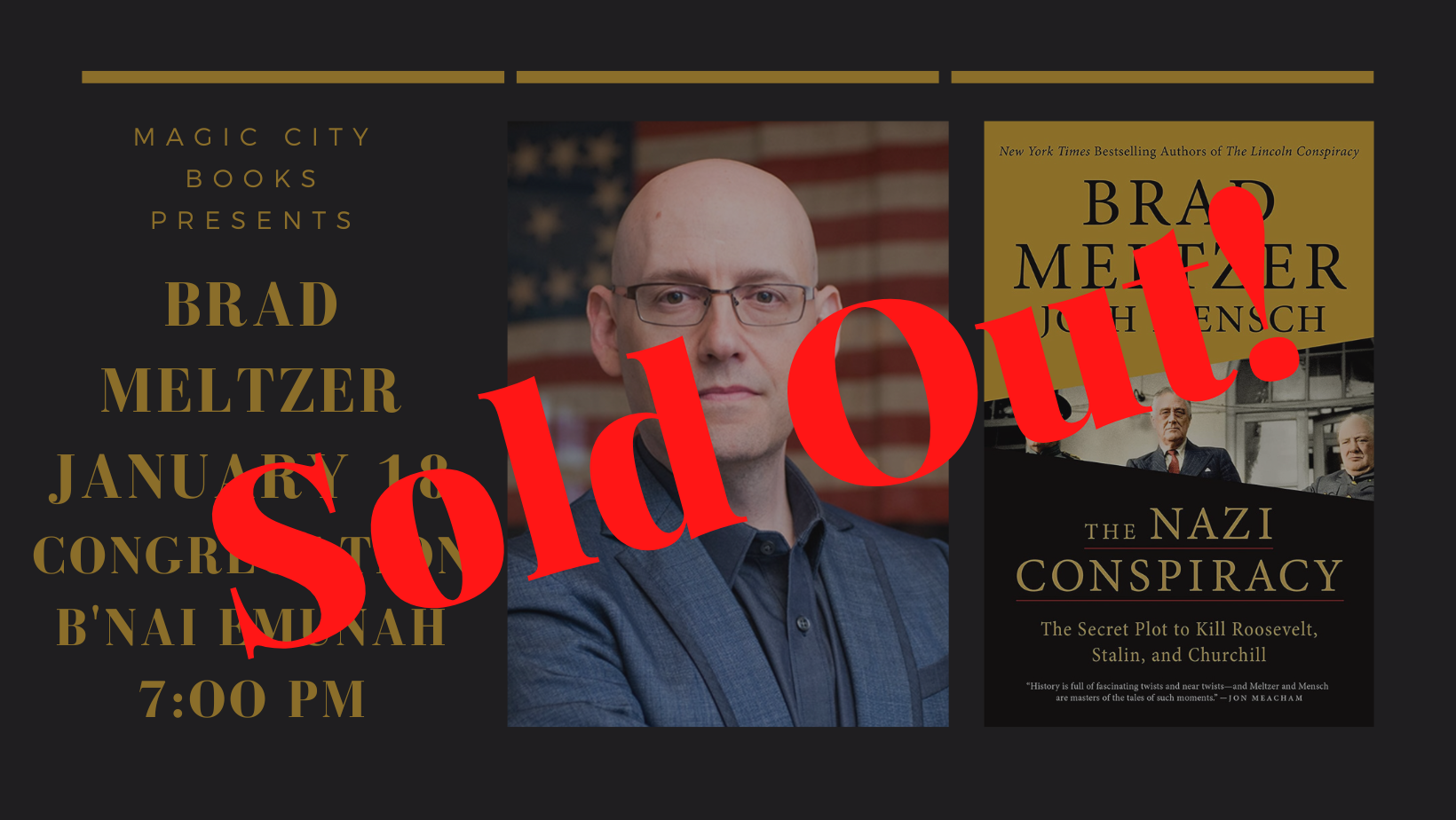 Magic City Books is proud to welcome Brad Meltzer for an in-person event to celebrate his latest book, The Nazi Conspiracy: The Secret Plot to Kill Roosevelt, Stalin, and Churchill, on Wednesday January 18, 2023. This event will be held at Congregation B’nai Emunah (1719 S Owasso Ave) at 7:00 pm.

A true story filled with daring rescues, body doubles, and political intrigue, The Nazi Conspiracy details FDR’s pivotal meeting in Tehran and the deadly Nazi plot against the heads of state of the three major Allied powers who attended it.

Brad Meltzer is the #1 New York Times bestselling author of The Lightning Rod, The Escape Artist, and over ten other bestselling thrillers, as well as the Ordinary People Change the World series. He is also the host of the History Channel TV shows Brad Meltzer’s Decoded and Brad Meltzer’s Lost History, which he used to help find the missing 9/11 flag that the firefighters raised at Ground Zero.

This is a ticketed event, each ticket includes one (1) copy of The Nazi Conspiracy by Brad Meltzer and Josh Mensch ($29.99 value) and one (1) seat at the event on Wednesday January 18 at 7:00 pm.

The Nazi Conspiracy published on January 10. Ticket holders are able to pick up their book starting January 10 at Magic City Books, they will also be available to pick up at the event. Mr. Melzer will be signing books at the conclusion of the event.

All tickets include a copy of the book, there is a limit of four tickets per transaction. Please provide the full name and email address of each ticket holder so that all event notifications and information can be sent to all attendees.

If you have a ticket and are unable to attend the event, you will be able to pick up your book at Magic City Books during normal business hours. The last day for ticket holders to pick up The Nazi Conspiracy by Brad Meltzer is Friday, March 3, 2023. We will make an effort to have signed books available for pick up but can not guarantee a signed copy.

About The Nazi Conspiracy:

From the New York Times bestselling authors of The First Conspiracy and The Lincoln Conspiracy comes the little-known true story of a Nazi plot to kill FDR, Joseph Stalin, and Winston Churchill at the height of World War II.

In 1943, as the war against Nazi Germany raged abroad, President Franklin Roosevelt had a critical goal: a face-to-face sit-down with his allies Joseph Stalin and Winston Churchill. This first-ever meeting of the Big Three in Tehran, Iran, would decide some of the most crucial strategic details of the war. Yet when the Nazis found out about the meeting, their own secret plan took shape–an assassination plot that would’ve changed history.

A true story filled with daring rescues, body doubles, and political intrigue, The Nazi Conspiracy details FDR’s pivotal meeting in Tehran and the deadly Nazi plot against the heads of state of the three major Allied powers who attended it.

With all the hallmarks of a Brad Meltzer and Josh Mensch page-turner, The Nazi Conspiracy explores the great political minds of the twentieth century, investigating the pivotal years of the war in gripping detail. This meeting of the Big Three changed the course of World War II. Here’s the inside story of how it almost led to a world-shattering disaster.