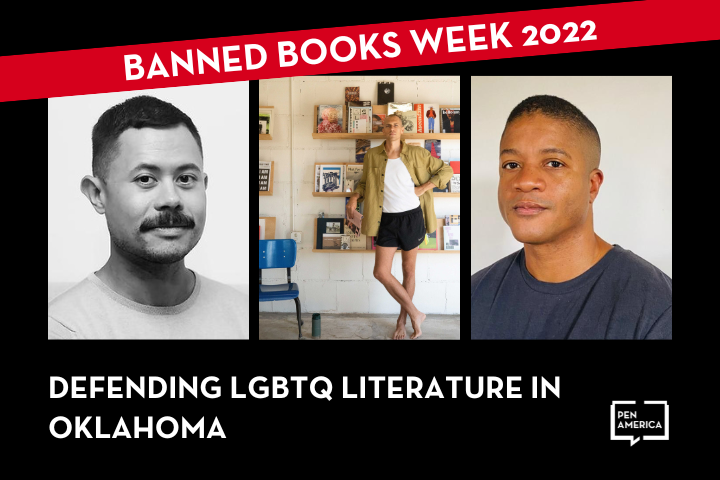 Join PEN Tulsa for a virtual conversation addressing the homophobia and transphobia embedded in the recent wave of book bans in Oklahoma and across the country. Moderated by Tulsa-based writer and publisher Ryan Fitzgibbon, the conversation will feature celebrated author and illustrator Mike Curato and PEN Across America Director Program William Johnson. This conversation will offer strategies on how to push back against the recent book bans, while also offering a space to celebrate queer literature in all of its forms.

You can register for this free virtual event at: https://pen-america-org.zoom.us/webinar/register/WN_5erC-u1XSR-YSy8qv-aczA. After registering you will receive an email with details on how to join the event on Wednesday September 21 at 7:00 pm CT.

Flamer by Mike Curato is available at Magic City Books or you can purchase a copy online at: https://magiccitybooks.square.site/product/flamer/858.

Mike Curato loves drawing and writing almost as much as he loves cupcakes and ice cream (and that’s a LOT!). He is the author and illustrator of everyone’s favorite polka-dotted elephant, Little Elliot. His debut title—Little Elliot, Big City—released in 2014 to critical acclaim, has won several awards, and has been translated into over ten languages. There are now five books in the Little Elliot series, including Little Elliot, Big Family; Little Elliot, Big Fun; Little Elliot, Fall Friends; and Merry Christmas, Little Elliot. Meanwhile, Mike had the pleasure of illustrating What If… by Samantha Berger, All the Way to Havana by Margarita Engle, Worm Loves Worm by J.J. Austrian, The Power of One written by Trudy Ludwig. He has also contributed to What’s Your Favorite Color? by Eric Carle and Friends, Sunny Day: A Celebration of the Sesame Street Theme Song, and Dear Heartbreak: YA Authors and Teens on the Dark Side of Love. Publishers Weekly named Mike a “Fall 2014 Flying Start.” In the same year, he won the Society of Illustrators Original Art Show Founder’s Award. Mike’s debut young adult graphic novel, Flamer, was awarded the 2020 Lambda Literary Award for LGBTQ Young Adult and the 2021 Massachusetts Book Award for Middle Grade/Young Adult.

William Johnson is the PEN Across America program director at PEN America. A longtime steward in the writing community, Johnson was the editor and publisher of Mary Literary, a literary magazine committed to showcasing work of artistic integrity. He also co-produced Nepantla: A Journal Dedicated to Queer Poets of Color, the first major anthology for queer poets of color in the United States. In 2011, Johnson began his tenure at Lambda Literary, an organization dedicated to promoting LGBTQ literature. As the deputy director of Lambda Literary, Johnson oversaw many of the organization’s most dynamic programs and public events, including the Writer’s Retreat for Emerging LGBTQ Voices and Lambda’s web magazine, the Lambda Literary Review.

In 2021, Johnson was awarded The Publishing Triangle’s Leadership Award, an award recognizing contributions to LGBTQ literature by those who are not primarily writers, such as editors, agents, librarians, and institutions.

Ryan Fitzgibbon is a publisher and creative independent living in Tulsa, Oklahoma. From 2012-2018, Ryan published ten issues of the LGBTQ magazine, Hello Mr., coinciding with a zine residency at Brooklyn, New York. Prior to launching his debut publication, he worked in San Francisco at the design and innovation firm IDEO. Over the last decade, Ryan has served on the boards of AIGA and of The Gay Men’s Health Crisis. He has judged several design award shows, including D&AD and ADC/The One Show, has spoken at numerous design conferences, and was named one of 30 “New Visual Artists under 30” by PRINT magazine. Shortly after moving to Tulsa at the beginning of 2020, Ryan was diagnosed with HIV, inspiring the creation of In Our Blood, a guide to detect, exercise, and replenish your inner activist. He’s put his experience to work supporting the publishing pursuits of The Black Wall Street Times. Most recently, he co-founded HANK, the digital marketplace contextualizing queer goods, named after Hanky Code, first popularized in the ‘70s by gay men flagging themselves with handkerchiefs to showcase sexual preferences. Ryan received a BFA in 2009 from Grand Valley State University in Grand Rapids, Michigan. In 2012, he participated in a trial residency at FABRICA, the communications research centre in Treviso, Italy where COLORS magazine is produced.