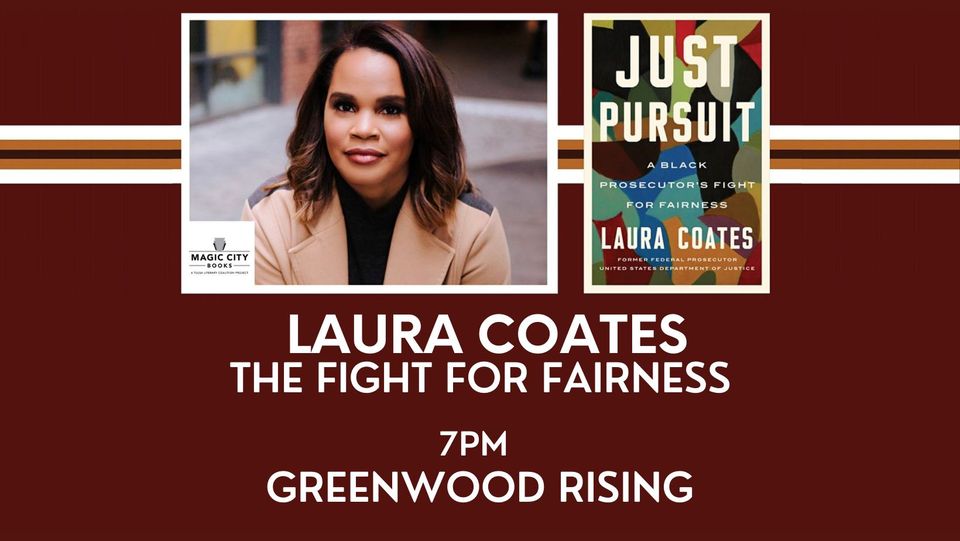 This is a ticketed event, each ticket includes one (1) copy of Just Pursuit by Laura Coates and one (1) seat at the event on Tuesday, February 1 at 7:00 pm at Greenwood Rising, 23 N. Greenwood Avenue.

Tickets are on Sale Now!

“A firsthand, eye-opening story of a prosecutor that exposes the devastating criminal punishment system. Laura Coates bleeds for justice on the page.” –Ibram X. Kendi, National Book Award-winning author of Stamped from the Beginning and How to Be an Antiracist

When Laura Coates joined the Department of Justice as a prosecutor, she wanted to advocate for the most vulnerable among us. But she quickly realized that even with the best intentions, “the pursuit of justice creates injustice.”

Through Coates’s experiences, we see that no matter how fair you try to fight, being Black, a woman, and a mother are identities often at odds in the justice system. She and her colleagues face seemingly impossible situations as they teeter between what is right and what is just.

On the front lines of our legal system, Coates saw how Black communities are policed differently; Black cases are prosecuted differently; Black defendants are judged differently. How the court system seems to be the one place where minorities are overrepresented, an unrelenting parade of Black and Brown defendants in numbers that belie their percentage in the population and overfill American prisons. She also witnessed how others in the system either abused power or were abused by it–for example, when an undocumented witness was arrested by ICE, when a white colleague taught Coates how to unfairly interrogate a young Black defendant, or when a judge victim-blamed a young sexual assault survivor based on her courtroom attire.

Through these revelatory and captivating scenes from the courtroom, Laura Coates explores the tension between the idealism of the law and the reality of working within the parameters of our flawed legal system, exposing the chasm between what is right and what is lawful.

Laura Coates is a CNN senior legal analyst, SiriusXM host, and adjunct professor at the George Washington University School of Law. A former federal prosecutor, Coates served as Assistant United States Attorney for the District of Columbia and a Trial Attorney in the Civil Rights Division of the Department of Justice, specializing in the enforcement of voting rights throughout the United States. As a civil rights attorney, she traveled throughout the nation supervising local and national elections and led investigations into allegations of unconstitutional voting practices. In private practice, Laura was an intellectual property litigator with an expertise in First Amendment and media law. A graduate of Princeton University’s School of Public and International Affairs, and the University of Minnesota Law School, Coates resides outside of Washington, DC, with her husband and two children.